Upstart Holdings, Inc. (NASDAQ:UPST – Get Rating) CEO Dave Girouard sold 41,667 shares of Upstart stock in a transaction dated Monday, May 2nd. The stock was sold at an average price of $80.00, for a total value of $3,333,360.00. Following the completion of the sale, the chief executive officer now owns 87,114 shares in the company, valued at $6,969,120. The transaction was disclosed in a legal filing with the SEC, which is available at this hyperlink.

Upstart (NASDAQ:UPST – Get Rating) last announced its earnings results on Tuesday, February 15th. The company reported $0.61 earnings per share (EPS) for the quarter, beating analysts’ consensus estimates of $0.18 by $0.43. The company had revenue of $304.85 million for the quarter, compared to analyst estimates of $262.01 million. Upstart had a return on equity of 21.33% and a net margin of 15.96%. On average, analysts predict that Upstart Holdings, Inc. will post 1.04 EPS for the current fiscal year.

About Upstart (Get Rating)

Upstart Holdings, Inc operates a cloud- based artificial intelligence (AI) lending platform in the United States. The company's platform aggregates consumer demand for loans and connects it to its network of the company's AI- enabled bank partners. Its platform connects consumers, banks, and institutional investors through a shared AI lending platform. 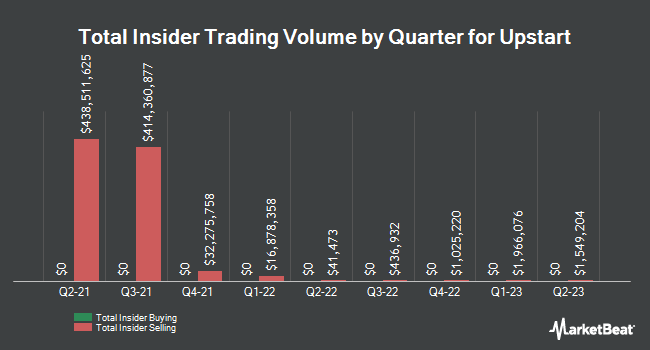 Comparing Weatherford International and Its Competitors

-$1.17 Earnings Per Share Expected for 2seventy bio, Inc. This Quarter