BRF (NYSE:BRFS – Get Rating) was downgraded by stock analysts at TheStreet from a “c” rating to a “d” rating in a research note issued on Thursday, TheStreetRatingsTable reports.

A number of other brokerages have also weighed in on BRFS. The Goldman Sachs Group lowered shares of BRF from a “neutral” rating to a “sell” rating in a report on Monday, April 11th. StockNews.com started coverage on BRF in a research note on Thursday, March 31st. They set a “hold” rating on the stock. Zacks Investment Research upgraded BRF from a “sell” rating to a “hold” rating in a research report on Tuesday. Finally, JPMorgan Chase & Co. downgraded shares of BRF from a “neutral” rating to an “underweight” rating in a research report on Thursday. Three investment analysts have rated the stock with a sell rating, three have assigned a hold rating and one has given a buy rating to the company. According to MarketBeat.com, the stock currently has an average rating of “Hold” and a consensus target price of $5.38.

About BRF (Get Rating) 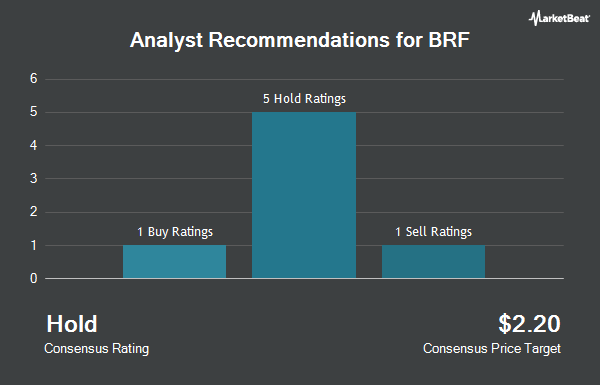 Receive News & Ratings for BRF Daily - Enter your email address below to receive a concise daily summary of the latest news and analysts' ratings for BRF and related companies with MarketBeat.com's FREE daily email newsletter.

Owlet and Its Competitors Head to Head Review

Complete the form below to receive the latest headlines and analysts' recommendations for BRF with our free daily email newsletter: