Equities analysts forecast that Apollo Endosurgery, Inc. (NASDAQ:APEN – Get Rating) will post earnings of ($0.21) per share for the current fiscal quarter, according to Zacks. Two analysts have provided estimates for Apollo Endosurgery’s earnings. The highest EPS estimate is ($0.17) and the lowest is ($0.24). Apollo Endosurgery reported earnings per share of ($0.11) during the same quarter last year, which would suggest a negative year-over-year growth rate of 90.9%. The business is scheduled to announce its next earnings report on Monday, January 1st.

On average, analysts expect that Apollo Endosurgery will report full-year earnings of ($0.83) per share for the current year, with EPS estimates ranging from ($0.91) to ($0.61). For the next year, analysts expect that the company will report earnings of ($0.75) per share, with EPS estimates ranging from ($0.88) to ($0.48). Zacks Investment Research’s EPS averages are a mean average based on a survey of sell-side analysts that follow Apollo Endosurgery.

Apollo Endosurgery (NASDAQ:APEN – Get Rating) last announced its earnings results on Tuesday, May 3rd. The biotechnology company reported ($0.21) EPS for the quarter, missing analysts’ consensus estimates of ($0.20) by ($0.01). Apollo Endosurgery had a negative return on equity of 95.87% and a negative net margin of 43.31%. During the same quarter in the prior year, the company earned ($0.17) earnings per share.

In other Apollo Endosurgery news, CFO Jeffrey G. Black bought 15,000 shares of the stock in a transaction dated Friday, February 25th. The shares were bought at an average cost of $5.48 per share, with a total value of $82,200.00. The purchase was disclosed in a document filed with the Securities & Exchange Commission, which is available at the SEC website. Company insiders own 30.00% of the company’s stock.

Apollo Endosurgery, Inc, a medical technology company, focuses on the design, development, and commercialization of medical devices. The company offers OverStitch and OverStitch Sx Endoscopic Suturing Systems that enable advanced endoscopic procedures by allowing physicians to sutures and secure the approximation of tissue through a flexible endoscope. 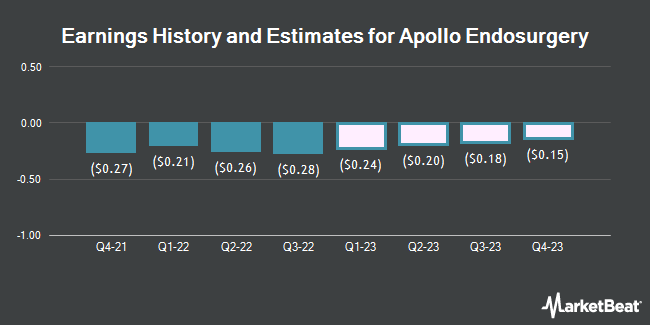 Complete the form below to receive the latest headlines and analysts' recommendations for Apollo Endosurgery with our free daily email newsletter: