Wall Street brokerages expect Mohawk Industries, Inc. (NYSE:MHK – Get Rating) to announce $3.20 billion in sales for the current fiscal quarter, according to Zacks Investment Research. Four analysts have made estimates for Mohawk Industries’ earnings. The highest sales estimate is $3.34 billion and the lowest is $2.99 billion. Mohawk Industries reported sales of $2.95 billion in the same quarter last year, which would suggest a positive year-over-year growth rate of 8.5%. The company is expected to issue its next quarterly earnings results on Monday, January 1st.

According to Zacks, analysts expect that Mohawk Industries will report full year sales of $12.26 billion for the current fiscal year, with estimates ranging from $12.06 billion to $12.60 billion. For the next fiscal year, analysts expect that the business will post sales of $12.54 billion, with estimates ranging from $12.04 billion to $13.32 billion. Zacks Investment Research’s sales calculations are a mean average based on a survey of sell-side analysts that follow Mohawk Industries.

Mohawk Industries (NYSE:MHK – Get Rating) last posted its quarterly earnings results on Thursday, April 28th. The company reported $3.78 earnings per share (EPS) for the quarter, topping analysts’ consensus estimates of $2.89 by $0.89. The business had revenue of $3.02 billion during the quarter, compared to analysts’ expectations of $2.85 billion. Mohawk Industries had a net margin of 9.02% and a return on equity of 12.00%. The business’s quarterly revenue was up 13.0% on a year-over-year basis. During the same quarter last year, the company posted $3.49 earnings per share.

In other news, COO Chistopher Wellborn acquired 10,000 shares of the stock in a transaction dated Thursday, February 24th. The shares were acquired at an average cost of $135.76 per share, for a total transaction of $1,357,600.00. The transaction was disclosed in a legal filing with the Securities & Exchange Commission, which is available at the SEC website. Insiders own 18.90% of the company’s stock.

About Mohawk Industries (Get Rating) 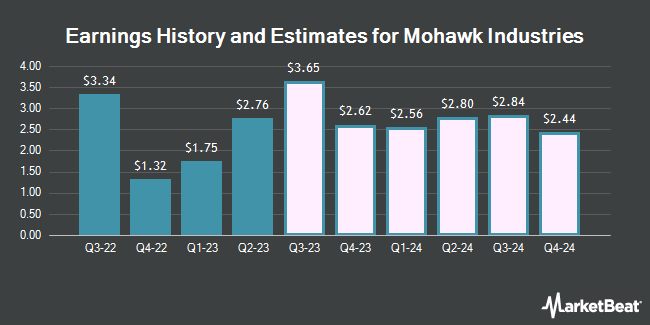 Complete the form below to receive the latest headlines and analysts' recommendations for Mohawk Industries with our free daily email newsletter: