GDS Holdings Limited (NASDAQ:GDS – Get Rating) – Research analysts at Jefferies Financial Group increased their FY2026 earnings estimates for GDS in a research report issued to clients and investors on Thursday, May 19th. Jefferies Financial Group analyst E. Lee now anticipates that the company will post earnings of $1.13 per share for the year, up from their prior estimate of $0.99.

GDS (NASDAQ:GDS – Get Rating) last posted its quarterly earnings results on Tuesday, March 22nd. The company reported ($0.30) earnings per share for the quarter, beating the consensus estimate of ($0.40) by $0.10. The business had revenue of $2.19 billion during the quarter, compared to analysts’ expectations of $2.15 billion. GDS had a negative net margin of 18.43% and a negative return on equity of 6.25%. The business’s revenue for the quarter was up 34.0% on a year-over-year basis. During the same quarter in the prior year, the company posted ($0.26) EPS.

About GDS (Get Rating)

GDS Holdings Limited, together with its subsidiaries, develops and operates data centers in the People's Republic of China. The company provides colocation, managed hosting, and managed cloud services, as well as consulting services to the cloud, internet and banking industries. The company serves cloud service providers, Internet companies, financial institutions, telecommunications and IT service providers, and large domestic private sector and multinational corporations. 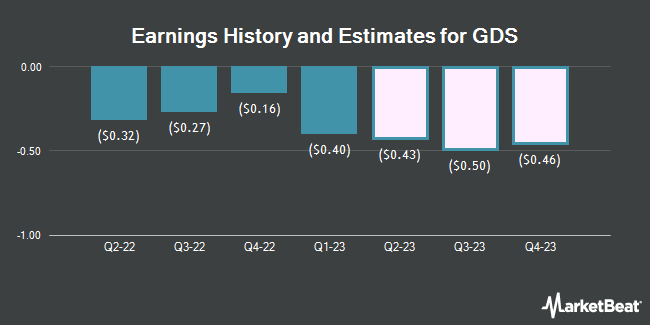 Receive News & Ratings for GDS Daily - Enter your email address below to receive a concise daily summary of the latest news and analysts' ratings for GDS and related companies with MarketBeat.com's FREE daily email newsletter.

Complete the form below to receive the latest headlines and analysts' recommendations for GDS with our free daily email newsletter: