Wall Street brokerages expect ProPetro Holding Corp. (NYSE:PUMP – Get Rating) to announce $313.38 million in sales for the current quarter, according to Zacks. Nine analysts have issued estimates for ProPetro’s earnings, with the lowest sales estimate coming in at $303.20 million and the highest estimate coming in at $317.76 million. ProPetro posted sales of $216.89 million during the same quarter last year, which suggests a positive year over year growth rate of 44.5%. The firm is scheduled to announce its next earnings results on Monday, January 1st.

ProPetro (NYSE:PUMP – Get Rating) last posted its earnings results on Tuesday, May 3rd. The company reported $0.11 earnings per share for the quarter, topping the consensus estimate of $0.06 by $0.05. The firm had revenue of $282.68 million for the quarter, compared to analyst estimates of $273.81 million. ProPetro had a negative return on equity of 2.62% and a negative net margin of 2.21%. The company’s revenue for the quarter was up 75.1% on a year-over-year basis. During the same period in the previous year, the company posted ($0.20) earnings per share. 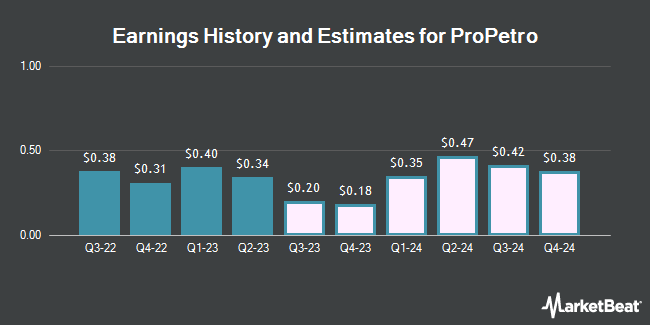