Wall Street analysts expect that Rocket Pharmaceuticals, Inc. (NASDAQ:RCKT – Get Rating) will announce earnings per share (EPS) of ($0.68) for the current quarter, according to Zacks. Zero analysts have issued estimates for Rocket Pharmaceuticals’ earnings. The highest EPS estimate is ($0.64) and the lowest is ($0.76). Rocket Pharmaceuticals posted earnings of ($0.55) per share during the same quarter last year, which would suggest a negative year over year growth rate of 23.6%. The company is expected to announce its next quarterly earnings results on Monday, January 1st.

On average, analysts expect that Rocket Pharmaceuticals will report full-year earnings of ($2.70) per share for the current year, with EPS estimates ranging from ($2.80) to ($2.60). For the next financial year, analysts expect that the company will post earnings of ($2.36) per share, with EPS estimates ranging from ($3.19) to ($1.47). Zacks’ earnings per share calculations are a mean average based on a survey of sell-side research analysts that cover Rocket Pharmaceuticals.

Rocket Pharmaceuticals (NASDAQ:RCKT – Get Rating) last posted its quarterly earnings results on Thursday, May 5th. The biotechnology company reported ($0.67) earnings per share for the quarter, topping analysts’ consensus estimates of ($0.71) by $0.04. During the same quarter in the prior year, the business earned ($0.65) earnings per share.

In related news, insider Jonathan David Schwartz sold 45,000 shares of the company’s stock in a transaction on Wednesday, March 30th. The shares were sold at an average price of $16.41, for a total transaction of $738,450.00. The transaction was disclosed in a filing with the SEC, which is accessible through this hyperlink. 36.50% of the stock is owned by corporate insiders.

Rocket Pharmaceuticals, Inc, together with its subsidiaries, operates as a multi-platform biotechnology company that focuses on developing gene therapies for rare and devastating diseases. It has three clinical-stage ex vivo lentiviral vector programs for fanconi anemia, a genetic defect in the bone marrow that reduces production of blood cells or promotes the production of faulty blood cells; leukocyte adhesion deficiency-I, a genetic disorder that causes the immune system to malfunction; and pyruvate kinase deficiency, a rare red blood cell autosomal recessive disorder that results in chronic non-spherocytic hemolytic anemia. 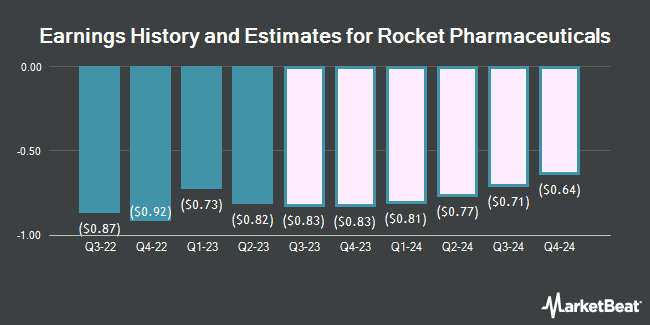 Complete the form below to receive the latest headlines and analysts' recommendations for Rocket Pharmaceuticals with our free daily email newsletter: