Wall Street brokerages expect Akamai Technologies, Inc. (NASDAQ:AKAM – Get Rating) to post sales of $898.59 million for the current fiscal quarter, Zacks reports. Seven analysts have made estimates for Akamai Technologies’ earnings. The lowest sales estimate is $892.10 million and the highest is $905.02 million. Akamai Technologies reported sales of $852.82 million during the same quarter last year, which indicates a positive year-over-year growth rate of 5.4%. The firm is expected to report its next quarterly earnings results on Monday, January 1st.

According to Zacks, analysts expect that Akamai Technologies will report full-year sales of $3.67 billion for the current year, with estimates ranging from $3.63 billion to $3.70 billion. For the next year, analysts anticipate that the company will post sales of $4.01 billion, with estimates ranging from $3.94 billion to $4.13 billion. Zacks’ sales calculations are a mean average based on a survey of sell-side analysts that cover Akamai Technologies.

Akamai Technologies (NASDAQ:AKAM – Get Rating) last released its earnings results on Tuesday, May 3rd. The technology infrastructure company reported $1.12 earnings per share (EPS) for the quarter, missing the consensus estimate of $1.13 by ($0.01). The firm had revenue of $903.65 million during the quarter, compared to analyst estimates of $904.89 million. Akamai Technologies had a net margin of 17.46% and a return on equity of 17.42%. Akamai Technologies’s quarterly revenue was up 7.2% on a year-over-year basis. During the same quarter in the previous year, the firm earned $1.10 EPS.

About Akamai Technologies (Get Rating) 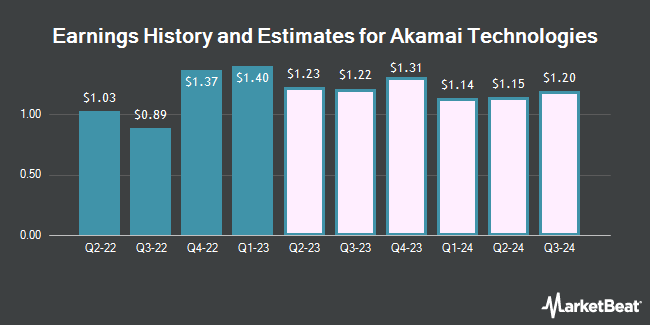 State of Alaska Department of Revenue Has $10.34 Million Stock Holdings in Autodesk, Inc.

Complete the form below to receive the latest headlines and analysts' recommendations for Akamai Technologies with our free daily email newsletter: