Charles & Colvard, Ltd. (NASDAQ:CTHR – Get Rating) Director Neal I. Goldman purchased 40,898 shares of the business’s stock in a transaction on Wednesday, May 25th. The shares were bought at an average price of $1.34 per share, with a total value of $54,803.32. Following the purchase, the director now directly owns 1,080,000 shares in the company, valued at approximately $1,447,200. The transaction was disclosed in a document filed with the Securities & Exchange Commission, which is accessible through the SEC website.

Charles & Colvard, Ltd. (NASDAQ:CTHR – Get Rating) last issued its earnings results on Thursday, May 5th. The company reported $0.01 earnings per share (EPS) for the quarter, meeting analysts’ consensus estimates of $0.01. Charles & Colvard, Ltd. had a net margin of 24.63% and a return on equity of 18.57%. During the same quarter in the previous year, the business posted $0.03 EPS. On average, sell-side analysts forecast that Charles & Colvard, Ltd. will post 0.07 EPS for the current fiscal year.

About Charles & Colvard, Ltd. (Get Rating) 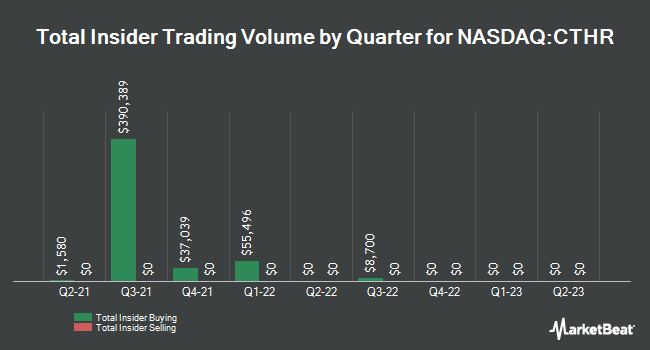 Complete the form below to receive the latest headlines and analysts' recommendations for Charles & Colvard Ltd. with our free daily email newsletter: