Amazon.com (NASDAQ:AMZN) had its price objective cut by analysts at JMP Securities from $3,600.00 to $3,450.00 in a report released on Wednesday, The Fly reports. The firm presently has an “outperform” rating on the e-commerce giant’s stock. JMP Securities’ price objective would suggest a potential upside of 42.17% from the stock’s previous close.

Several other equities research analysts also recently issued reports on AMZN. DA Davidson cut their target price on shares of Amazon.com from $3,900.00 to $3,125.00 in a research note on Friday, April 29th. BNP Paribas initiated coverage on Amazon.com in a research report on Tuesday, March 29th. They issued an “underperform” rating and a $2,800.00 price objective for the company. Credit Suisse Group decreased their target price on Amazon.com from $4,100.00 to $3,700.00 in a report on Friday, April 29th. Citigroup initiated coverage on Amazon.com in a report on Wednesday, April 20th. They set a “buy” rating and a $4,100.00 price target for the company. Finally, StockNews.com downgraded shares of Amazon.com from a “hold” rating to a “sell” rating in a report on Saturday. Three research analysts have rated the stock with a sell rating, two have given a hold rating and thirty-six have given a buy rating to the company. According to MarketBeat, the stock has a consensus rating of “Buy” and a consensus target price of $3,752.37.

Amazon.com’s stock is scheduled to split before the market opens on Monday, June 6th. The 20-1 split was announced on Wednesday, March 9th. The newly minted shares will be payable to shareholders after the closing bell on Friday, June 3rd.

Amazon.com (NASDAQ:AMZN – Get Rating) last released its earnings results on Thursday, April 28th. The e-commerce giant reported $4.24 earnings per share for the quarter, missing the consensus estimate of $8.73 by ($4.49). Amazon.com had a net margin of 4.48% and a return on equity of 21.60%. The firm had revenue of $116.44 billion during the quarter, compared to the consensus estimate of $116.52 billion. During the same period in the prior year, the business posted $15.79 earnings per share. Amazon.com’s quarterly revenue was up 7.3% compared to the same quarter last year. As a group, equities research analysts expect that Amazon.com will post 24.71 EPS for the current fiscal year.

Amazon.com, Inc engages in the retail sale of consumer products and subscriptions in North America and internationally. The company operates through three segments: North America, International, and Amazon Web Services (AWS). It sells merchandise and content purchased for resale from third-party sellers through physical and online stores. 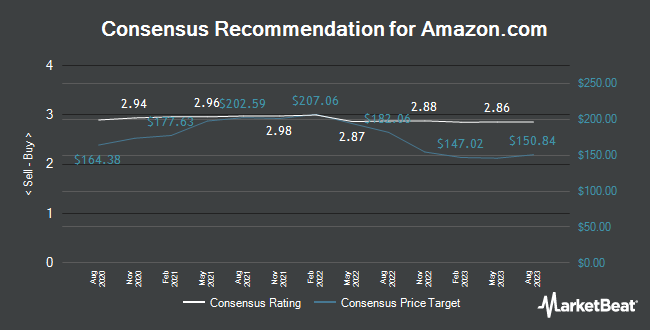 Complete the form below to receive the latest headlines and analysts' recommendations for Amazon.com with our free daily email newsletter: