Hammerson plc (LON:HMSO) Given Average Recommendation of “Sell” by Brokerages

Shares of Hammerson plc (LON:HMSO – Get Rating) have earned a consensus rating of “Sell” from the nine analysts that are presently covering the company, Marketbeat.com reports. Five research analysts have rated the stock with a sell recommendation and three have given a hold recommendation to the company. The average 12-month price target among brokers that have issued a report on the stock in the last year is GBX 30.17 ($0.38).

The firm also recently declared a dividend, which was paid on Tuesday, May 10th. Stockholders of record on Thursday, March 31st were given a GBX 0.20 ($0.00) dividend. The ex-dividend date was Thursday, March 31st. This represents a dividend yield of 0.58%. Hammerson’s payout ratio is -0.04%.

About Hammerson (Get Rating)

At Hammerson, we create vibrant, continually evolving spaces, in and around major cities, where people and brands want to be. We seek to deliver value for all our stakeholders and to create a positive and sustainable impact for generations to come. We own and operate high-quality flagship destinations and have investments in premium outlets in selected European countries and have a City Quarters strategy to evolve our portfolio beyond retail. 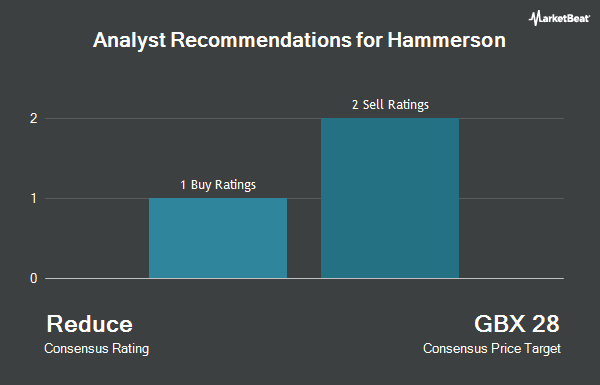 Complete the form below to receive the latest headlines and analysts' recommendations for Hammerson with our free daily email newsletter: