QuantumScape (NYSE:QS) Price Target Cut to $12.00 by Analysts at The Goldman Sachs Group

QuantumScape (NYSE:QS – Get Rating) had its price objective reduced by The Goldman Sachs Group from $17.00 to $12.00 in a research note issued on Wednesday, Stock Target Advisor reports. The brokerage presently has a “neutral” rating on the stock. The Goldman Sachs Group’s target price points to a potential downside of 3.92% from the stock’s previous close.

QuantumScape (NYSE:QS – Get Rating) last released its quarterly earnings results on Tuesday, April 26th. The company reported ($0.21) earnings per share for the quarter, missing the consensus estimate of ($0.17) by ($0.04). During the same quarter in the prior year, the business posted ($0.12) EPS. On average, sell-side analysts anticipate that QuantumScape will post -0.85 EPS for the current fiscal year.

QuantumScape Corporation, a development stage company, focuses on the development and commercialization of solid-state lithium-metal batteries for electric vehicles and other applications. The company was founded in 2010 and is headquartered in San Jose, California. 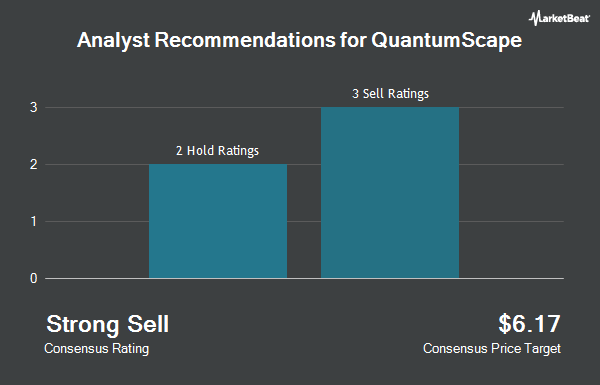 Complete the form below to receive the latest headlines and analysts' recommendations for QuantumScape with our free daily email newsletter: