Brokerages expect Ferguson plc (NASDAQ:FERG – Get Rating) to post earnings of $2.22 per share for the current fiscal quarter, Zacks reports. Two analysts have provided estimates for Ferguson’s earnings. The business is scheduled to report its next quarterly earnings report on Monday, January 1st.

According to Zacks, analysts expect that Ferguson will report full year earnings of $8.87 per share for the current year, with EPS estimates ranging from $8.36 to $9.12. For the next year, analysts forecast that the company will report earnings of $9.34 per share, with EPS estimates ranging from $9.10 to $9.46. Zacks Investment Research’s EPS averages are a mean average based on a survey of analysts that that provide coverage for Ferguson.

Ferguson (NASDAQ:FERG – Get Rating) last released its quarterly earnings results on Tuesday, March 15th. The company reported $1.93 EPS for the quarter, beating the consensus estimate of $1.73 by $0.20. The firm had revenue of $6.51 billion for the quarter, compared to analysts’ expectations of $6.04 billion.

The company also recently announced a semi-annual dividend, which was paid on Friday, May 6th. Investors of record on Friday, March 25th were paid a dividend of $0.84 per share. The ex-dividend date of this dividend was Thursday, March 24th. This represents a dividend yield of 1.7%. 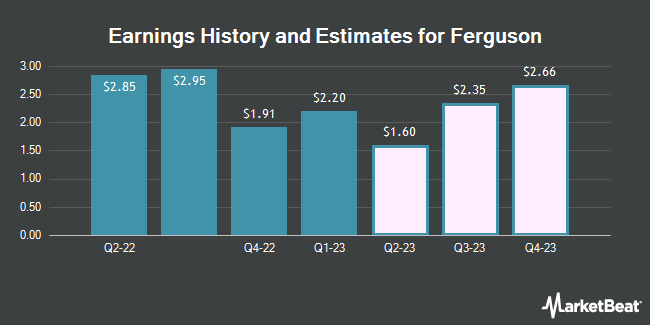