Aeglea BioTherapeutics (NASDAQ:AGLE – Get Rating) was downgraded by HC Wainwright from a “buy” rating to a “neutral” rating in a report released on Thursday, The Fly reports.

AGLE has been the subject of a number of other research reports. Zacks Investment Research upgraded Aeglea BioTherapeutics from a “hold” rating to a “buy” rating and set a $1.50 target price for the company in a research note on Tuesday, May 10th. StockNews.com initiated coverage on shares of Aeglea BioTherapeutics in a report on Thursday, March 31st. They set a “hold” rating on the stock. Finally, Piper Sandler lowered shares of Aeglea BioTherapeutics from an “overweight” rating to a “neutral” rating and decreased their price target for the stock from $4.00 to $1.00 in a research note on Thursday. Three investment analysts have rated the stock with a hold rating and four have issued a buy rating to the company. Based on data from MarketBeat.com, the stock currently has an average rating of “Buy” and a consensus target price of $10.30.

In related news, CEO Anthony G. Quinn bought 67,472 shares of Aeglea BioTherapeutics stock in a transaction dated Monday, March 14th. The shares were acquired at an average cost of $1.93 per share, with a total value of $130,220.96. The purchase was disclosed in a document filed with the Securities & Exchange Commission, which is accessible through the SEC website. Also, CEO Anthony G. Quinn purchased 80,079 shares of the stock in a transaction that occurred on Wednesday, March 16th. The stock was purchased at an average price of $2.34 per share, with a total value of $187,384.86. The disclosure for this purchase can be found here. In the last quarter, insiders bought 257,328 shares of company stock valued at $545,246. Company insiders own 3.80% of the company’s stock.

About Aeglea BioTherapeutics (Get Rating)

Aeglea BioTherapeutics, Inc, a clinical-stage biotechnology company, designs and develops human enzyme therapeutics for the treatment of patients and families with rare metabolic diseases. The company's lead product candidate is pegzilarginase, a recombinant human Arginase 1 that is in Phase III PEACE trial to evaluate the safety and efficacy for the treatment of Arginase 1 deficiency. 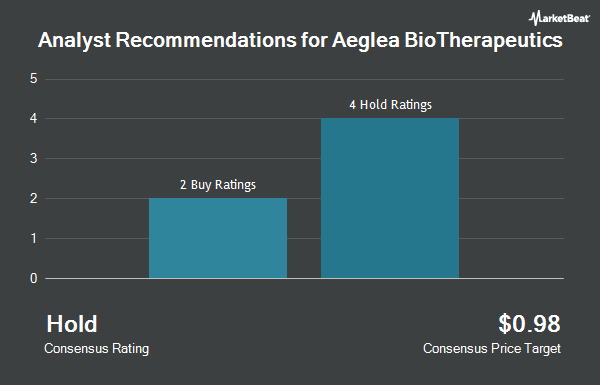 Complete the form below to receive the latest headlines and analysts' recommendations for Aeglea BioTherapeutics with our free daily email newsletter: