Everbridge, Inc. (NASDAQ:EVBG – Get Rating) insider Ajay Nigam sold 365 shares of the company’s stock in a transaction that occurred on Wednesday, June 1st. The stock was sold at an average price of $42.25, for a total value of $15,421.25. Following the completion of the transaction, the insider now owns 16,040 shares of the company’s stock, valued at $677,690. The transaction was disclosed in a filing with the SEC, which is available through the SEC website.

Everbridge (NASDAQ:EVBG – Get Rating) last released its earnings results on Monday, May 9th. The technology company reported ($0.02) earnings per share for the quarter, topping analysts’ consensus estimates of ($0.18) by $0.16. Everbridge had a negative return on equity of 9.28% and a negative net margin of 23.82%. The business had revenue of $100.38 million for the quarter, compared to analyst estimates of $98.82 million. During the same quarter last year, the firm posted ($0.13) earnings per share. The business’s revenue was up 22.1% compared to the same quarter last year. On average, research analysts expect that Everbridge, Inc. will post -1.56 EPS for the current fiscal year. 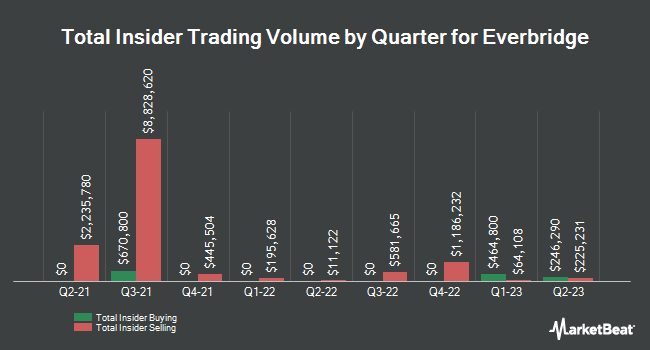