Wall Street brokerages predict that Olink Holding AB (publ) (NASDAQ:OLK – Get Rating) will announce $26.52 million in sales for the current quarter, Zacks Investment Research reports. Two analysts have issued estimates for Olink Holding AB (publ)’s earnings. The highest sales estimate is $26.65 million and the lowest is $26.39 million. Olink Holding AB (publ) posted sales of $17.69 million in the same quarter last year, which suggests a positive year-over-year growth rate of 49.9%. The firm is scheduled to report its next earnings report on Monday, January 1st.

According to Zacks, analysts expect that Olink Holding AB (publ) will report full-year sales of $142.06 million for the current fiscal year, with estimates ranging from $141.60 million to $142.52 million. For the next year, analysts anticipate that the firm will report sales of $204.61 million, with estimates ranging from $202.76 million to $206.46 million. Zacks Investment Research’s sales calculations are a mean average based on a survey of research firms that follow Olink Holding AB (publ).

Olink Holding AB (publ) (NASDAQ:OLK – Get Rating) last announced its earnings results on Thursday, May 12th. The company reported ($0.10) earnings per share for the quarter, beating the consensus estimate of ($0.17) by $0.07. Olink Holding AB (publ) had a negative return on equity of 7.46% and a negative net margin of 34.81%. The company had revenue of $22.68 million during the quarter, compared to the consensus estimate of $20.14 million. During the same period last year, the firm earned ($0.48) earnings per share.

Olink Holding AB (publ) provides various products and services for the academic, government, biopharmaceutical, biotechnology, and other institutions that focuses on life science research. Its products include Olink Explore for cardiovascular and metabolic, oncology, neurology, or inflammation diseases; Olink Target product line; and Olink Focus product line that consists of custom developed solutions for customers that has identified various proteins of interest or a protein signature to focus on. 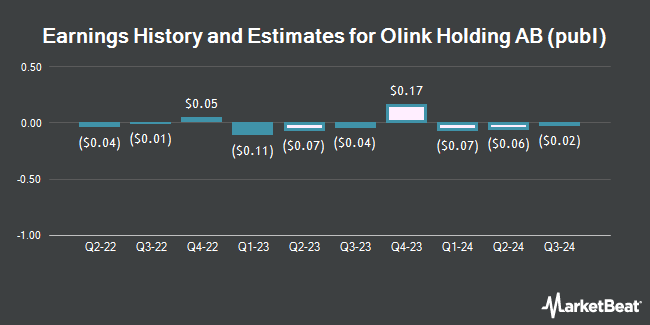 Complete the form below to receive the latest headlines and analysts' recommendations for Olink Holding AB (publ) with our free daily email newsletter: