Brokerages expect Pyxis Tankers Inc. (NASDAQ:PXS – Get Rating) to report earnings per share of $0.20 for the current fiscal quarter, according to Zacks. Three analysts have provided estimates for Pyxis Tankers’ earnings. The highest EPS estimate is $0.37 and the lowest is ($0.08). Pyxis Tankers reported earnings of ($0.16) per share during the same quarter last year, which would suggest a positive year-over-year growth rate of 225%. The business is expected to report its next quarterly earnings results on Monday, January 1st.

According to Zacks, analysts expect that Pyxis Tankers will report full-year earnings of $0.43 per share for the current year, with EPS estimates ranging from ($0.24) to $0.81. For the next fiscal year, analysts expect that the firm will report earnings of $0.54 per share, with EPS estimates ranging from $0.32 to $0.84. Zacks Investment Research’s EPS calculations are a mean average based on a survey of sell-side research firms that follow Pyxis Tankers.

Pyxis Tankers (NASDAQ:PXS – Get Rating) last posted its quarterly earnings results on Friday, March 18th. The transportation company reported ($0.56) earnings per share for the quarter, missing analysts’ consensus estimates of ($0.28) by ($0.28). Pyxis Tankers had a negative return on equity of 27.99% and a negative net margin of 50.97%. The company had revenue of $8.10 million during the quarter, compared to analyst estimates of $6.16 million.

Pyxis Tankers Inc operates as a maritime transportation company with a focus on the tanker sector in the United States. Its fleet transports refined petroleum products, such as naphtha, gasoline, jet fuel, kerosene, diesel, and fuel oil, as well as other liquid bulk items, including vegetable oils and organic chemicals. 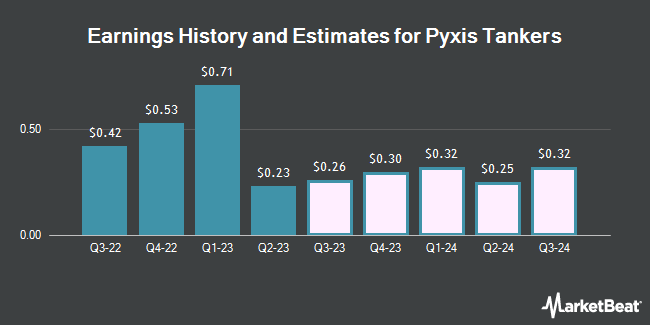 Complete the form below to receive the latest headlines and analysts' recommendations for Pyxis Tankers with our free daily email newsletter: