Brokerages expect Verizon Communications Inc. (NYSE:VZ – Get Rating) to post $33.59 billion in sales for the current fiscal quarter, according to Zacks Investment Research. Fourteen analysts have made estimates for Verizon Communications’ earnings, with the lowest sales estimate coming in at $31.92 billion and the highest estimate coming in at $34.25 billion. Verizon Communications reported sales of $33.76 billion during the same quarter last year, which would suggest a negative year-over-year growth rate of 0.5%. The business is scheduled to announce its next quarterly earnings report before the market opens on Monday, January 1st.

According to Zacks, analysts expect that Verizon Communications will report full year sales of $136.37 billion for the current year, with estimates ranging from $134.90 billion to $137.69 billion. For the next year, analysts anticipate that the business will post sales of $138.68 billion, with estimates ranging from $128.78 billion to $142.82 billion. Zacks’ sales calculations are a mean average based on a survey of sell-side research firms that that provide coverage for Verizon Communications.

Verizon Communications (NYSE:VZ – Get Rating) last posted its quarterly earnings data on Friday, April 22nd. The cell phone carrier reported $1.35 earnings per share for the quarter, meeting analysts’ consensus estimates of $1.35. The company had revenue of $33.60 billion during the quarter, compared to analysts’ expectations of $33.61 billion. Verizon Communications had a net margin of 15.93% and a return on equity of 28.15%. The firm’s revenue for the quarter was up 2.2% on a year-over-year basis. During the same period in the prior year, the company posted $1.31 EPS.

The company also recently declared a quarterly dividend, which will be paid on Monday, August 1st. Investors of record on Friday, July 8th will be given a $0.64 dividend. The ex-dividend date is Thursday, July 7th. This represents a $2.56 annualized dividend and a dividend yield of 4.98%. Verizon Communications’s dividend payout ratio (DPR) is presently 49.71%.

About Verizon Communications (Get Rating) 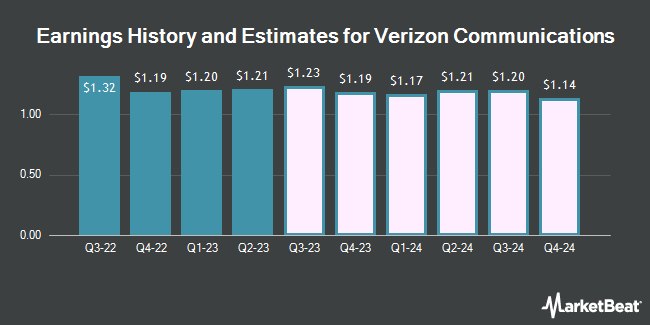 Telefônica Brasil S.A. Given Consensus Recommendation of “Hold” by Brokerages