Equities research analysts expect Comstock Resources, Inc. (NYSE:CRK – Get Rating) to post sales of $578.33 million for the current fiscal quarter, according to Zacks Investment Research. Four analysts have issued estimates for Comstock Resources’ earnings, with the lowest sales estimate coming in at $472.30 million and the highest estimate coming in at $846.00 million. Comstock Resources reported sales of $343.69 million in the same quarter last year, which indicates a positive year over year growth rate of 68.3%. The business is scheduled to report its next earnings report on Monday, January 1st.

According to Zacks, analysts expect that Comstock Resources will report full-year sales of $2.26 billion for the current financial year, with estimates ranging from $1.48 billion to $3.49 billion. For the next fiscal year, analysts anticipate that the firm will report sales of $2.53 billion, with estimates ranging from $1.76 billion to $3.12 billion. Zacks Investment Research’s sales calculations are a mean average based on a survey of sell-side analysts that cover Comstock Resources.

Comstock Resources (NYSE:CRK – Get Rating) last issued its earnings results on Tuesday, May 3rd. The oil and gas producer reported $0.51 EPS for the quarter, meeting the consensus estimate of $0.51. The company had revenue of $524.84 million for the quarter, compared to the consensus estimate of $438.02 million. Comstock Resources had a negative net margin of 10.76% and a positive return on equity of 45.27%. The firm’s revenue for the quarter was up 54.1% compared to the same quarter last year. During the same quarter in the previous year, the company earned $0.25 EPS.

Comstock Resources, Inc, an independent energy company, engages in the acquisition, exploration, development, and production of oil and natural gas primarily in North Louisiana and East Texas, the United States. As of December 31, 2021, the company had 6.1 trillion cubic feet of the natural gas equivalent of proved reserves. 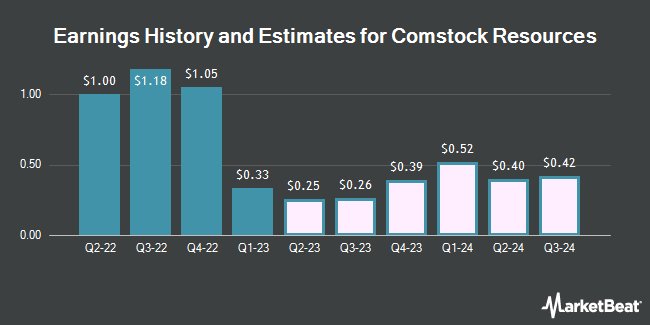 Should You Invest In This Health Care ETF?

Complete the form below to receive the latest headlines and analysts' recommendations for Comstock Resources with our free daily email newsletter: