Brokerages expect Oshkosh Co. (NYSE:OSK – Get Rating) to report sales of $2.20 billion for the current fiscal quarter, Zacks reports. Nine analysts have made estimates for Oshkosh’s earnings. The highest sales estimate is $2.30 billion and the lowest is $1.95 billion. Oshkosh reported sales of $2.21 billion in the same quarter last year, which would suggest a negative year over year growth rate of 0.5%. The business is expected to report its next quarterly earnings report on Monday, January 1st.

Oshkosh (NYSE:OSK – Get Rating) last posted its quarterly earnings results on Wednesday, April 27th. The company reported $0.24 EPS for the quarter, topping analysts’ consensus estimates of $0.17 by $0.07. Oshkosh had a return on equity of 7.63% and a net margin of 3.84%. The company had revenue of $1.95 billion for the quarter, compared to analysts’ expectations of $1.88 billion. During the same period in the previous year, the firm earned $1.48 EPS. The firm’s revenue was up 3.0% compared to the same quarter last year.

The firm also recently disclosed a quarterly dividend, which was paid on Friday, May 27th. Shareholders of record on Friday, May 13th were given a $0.37 dividend. This represents a $1.48 annualized dividend and a yield of 1.56%. The ex-dividend date of this dividend was Thursday, May 12th. Oshkosh’s dividend payout ratio (DPR) is presently 33.41%. 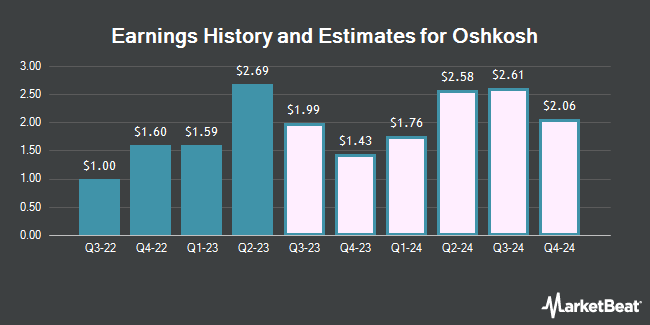