Intercept Pharmaceuticals, Inc. (NASDAQ:ICPT – Get Rating) has received a consensus recommendation of “Hold” from the fourteen analysts that are currently covering the stock, MarketBeat Ratings reports. One equities research analyst has rated the stock with a sell rating, seven have issued a hold rating and four have issued a buy rating on the company. The average 12-month price target among brokerages that have issued ratings on the stock in the last year is $27.23.

Intercept Pharmaceuticals (NASDAQ:ICPT – Get Rating) last issued its earnings results on Friday, May 6th. The biopharmaceutical company reported ($0.58) earnings per share for the quarter, topping analysts’ consensus estimates of ($0.89) by $0.31. The business had revenue of $88.58 million during the quarter, compared to the consensus estimate of $90.86 million. During the same quarter in the previous year, the firm posted ($1.22) earnings per share. On average, research analysts predict that Intercept Pharmaceuticals will post -2.71 EPS for the current year.

About Intercept Pharmaceuticals (Get Rating)

Intercept Pharmaceuticals, Inc, a biopharmaceutical company, focuses on the development and commercialization of therapeutics to treat progressive non-viral liver diseases in the United States, Europe, and Canada. The company markets Ocaliva, a farnesoid X receptor agonist used for the treatment of primary biliary cholangitis in combination with ursodeoxycholic acid in adults. 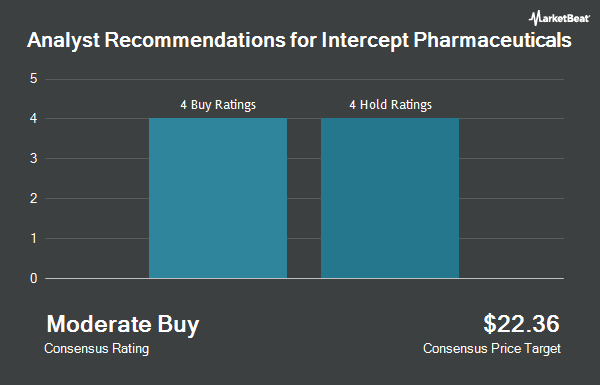 Complete the form below to receive the latest headlines and analysts' recommendations for Intercept Pharmaceuticals with our free daily email newsletter: