Wall Street brokerages expect US Foods Holding Corp. (NYSE:USFD – Get Rating) to announce $8.77 billion in sales for the current fiscal quarter, according to Zacks. Six analysts have issued estimates for US Foods’ earnings, with the highest sales estimate coming in at $9.16 billion and the lowest estimate coming in at $8.05 billion. US Foods posted sales of $7.66 billion in the same quarter last year, which suggests a positive year over year growth rate of 14.5%. The firm is scheduled to report its next earnings report on Monday, January 1st.

According to Zacks, analysts expect that US Foods will report full-year sales of $33.63 billion for the current fiscal year, with estimates ranging from $32.15 billion to $34.65 billion. For the next financial year, analysts forecast that the firm will report sales of $35.51 billion, with estimates ranging from $33.84 billion to $37.02 billion. Zacks’ sales averages are an average based on a survey of sell-side research analysts that cover US Foods.

US Foods (NYSE:USFD – Get Rating) last posted its earnings results on Thursday, May 12th. The company reported $0.36 earnings per share (EPS) for the quarter, beating analysts’ consensus estimates of $0.17 by $0.19. The company had revenue of $7.80 billion during the quarter, compared to the consensus estimate of $7.80 billion. US Foods had a net margin of 0.58% and a return on equity of 12.01%. The firm’s quarterly revenue was up 23.9% on a year-over-year basis. During the same period in the previous year, the firm posted $0.12 earnings per share.

In other news, Director Pietro Satriano sold 40,000 shares of the company’s stock in a transaction that occurred on Wednesday, May 18th. The shares were sold at an average price of $33.33, for a total value of $1,333,200.00. Following the transaction, the director now directly owns 594,159 shares in the company, valued at approximately $19,803,319.47. The sale was disclosed in a document filed with the SEC, which is accessible through this hyperlink. Also, Director Court D. Carruthers acquired 14,040 shares of the firm’s stock in a transaction dated Tuesday, March 15th. The stock was bought at an average price of $35.55 per share, for a total transaction of $499,122.00. The disclosure for this purchase can be found here. Insiders own 1.00% of the company’s stock.

About US Foods (Get Rating) 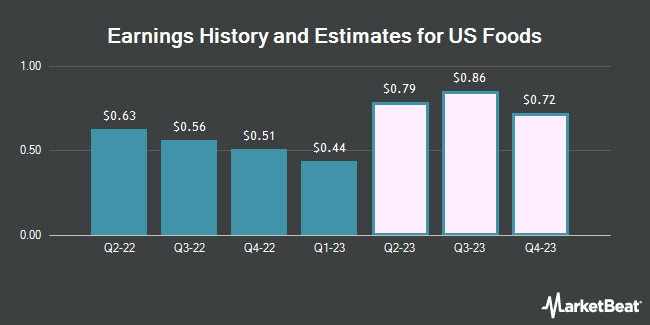 Receive News & Ratings for US Foods Daily - Enter your email address below to receive a concise daily summary of the latest news and analysts' ratings for US Foods and related companies with MarketBeat.com's FREE daily email newsletter.

Daily Ratings & News for US Foods

Complete the form below to receive the latest headlines and analysts' recommendations for US Foods with our free daily email newsletter: