Several other research firms have also commented on CARG. Benchmark cut their price target on shares of CarGurus from $63.00 to $50.00 in a report on Tuesday, May 10th. Needham & Company LLC reiterated a “buy” rating and issued a $40.00 price target on shares of CarGurus in a research report on Tuesday, May 24th. Piper Sandler lifted their price target on CarGurus from $35.00 to $40.00 and gave the stock a “neutral” rating in a research note on Wednesday, March 30th. Raymond James lowered their target price on CarGurus from $52.00 to $34.00 in a research note on Tuesday, May 10th. Finally, Zacks Investment Research upgraded CarGurus from a “sell” rating to a “hold” rating in a report on Wednesday, June 1st. Three investment analysts have rated the stock with a hold rating and seven have issued a buy rating to the company. According to data from MarketBeat.com, the company has an average rating of “Buy” and an average target price of $43.50.

CarGurus (NASDAQ:CARG – Get Rating) last issued its earnings results on Monday, May 9th. The company reported $0.36 EPS for the quarter, topping analysts’ consensus estimates of $0.35 by $0.01. CarGurus had a net margin of 2.05% and a return on equity of 22.94%. The company had revenue of $430.60 million for the quarter, compared to the consensus estimate of $392.66 million. During the same period in the previous year, the firm earned $0.24 earnings per share. CarGurus’s quarterly revenue was up 151.2% compared to the same quarter last year.

About CarGurus (Get Rating) 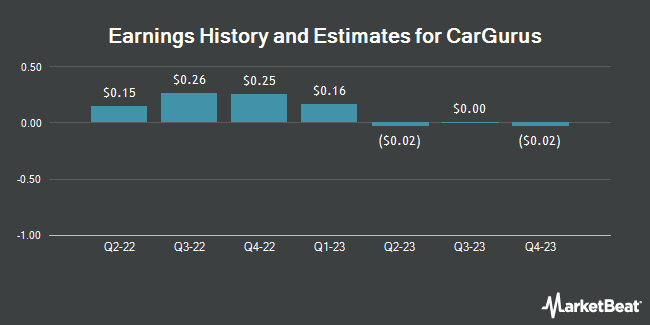