Braskem (NYSE:BAK – Get Rating) was downgraded by Zacks Investment Research from a “buy” rating to a “hold” rating in a report issued on Monday, Zacks.com reports.

According to Zacks, “Braskem SA figures as the largest petrochemical operation in Latin America and among the five largest private companies in Brazil. With industrial facilities located in Alagoas, Bahia, São Paulo and Rio Grande do Sul, Braskem produces primary base petrochemicals such as ethylene, propylene, benzene, caprolactam, DMT and termoplastic resins (polypropylene, polyethylene, PVC and PET) gas and GLP. “

Separately, TheStreet raised shares of Braskem from a “c” rating to a “b” rating in a research note on Thursday, May 12th. Four analysts have rated the stock with a hold rating and three have given a buy rating to the company’s stock. According to data from MarketBeat, Braskem presently has a consensus rating of “Hold” and an average price target of $30.50.

Braskem (NYSE:BAK – Get Rating) last announced its quarterly earnings data on Thursday, March 17th. The company reported $0.24 earnings per share for the quarter, missing analysts’ consensus estimates of $2.51 by ($2.27). Braskem had a net margin of 14.18% and a return on equity of 156.07%. The business had revenue of $5.06 billion during the quarter, compared to analyst estimates of $5.23 billion. As a group, sell-side analysts predict that Braskem will post 4.03 EPS for the current year.

About Braskem (Get Rating) 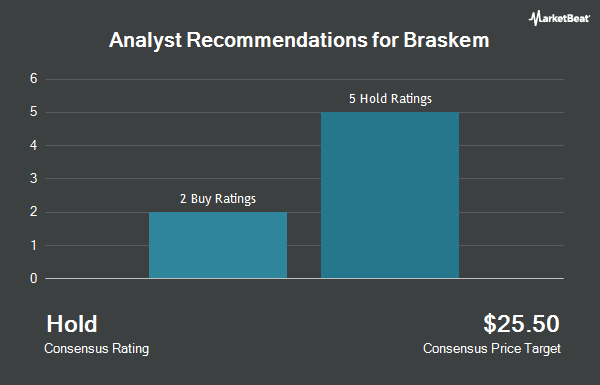 Receive News & Ratings for Braskem Daily - Enter your email address below to receive a concise daily summary of the latest news and analysts' ratings for Braskem and related companies with MarketBeat.com's FREE daily email newsletter.

Complete the form below to receive the latest headlines and analysts' recommendations for Braskem with our free daily email newsletter: