$1.08 Billion in Sales Expected for Terex Co. (NYSE:TEX) This Quarter

Analysts expect Terex Co. (NYSE:TEX – Get Rating) to announce $1.08 billion in sales for the current quarter, Zacks Investment Research reports. Seven analysts have issued estimates for Terex’s earnings. The lowest sales estimate is $1.01 billion and the highest is $1.14 billion. Terex posted sales of $1.04 billion in the same quarter last year, which would indicate a positive year over year growth rate of 3.8%. The firm is scheduled to issue its next quarterly earnings results on Monday, January 1st.

Terex (NYSE:TEX – Get Rating) last posted its quarterly earnings results on Thursday, April 28th. The industrial products company reported $0.74 earnings per share for the quarter, topping analysts’ consensus estimates of $0.47 by $0.27. Terex had a net margin of 5.78% and a return on equity of 21.36%. The firm had revenue of $1 billion for the quarter, compared to the consensus estimate of $979.13 million.

In related news, VP Scott Posner sold 2,000 shares of the firm’s stock in a transaction dated Wednesday, May 25th. The stock was sold at an average price of $33.96, for a total value of $67,920.00. Following the sale, the vice president now directly owns 64,621 shares of the company’s stock, valued at $2,194,529.16. The transaction was disclosed in a legal filing with the Securities & Exchange Commission, which is accessible through this link. Company insiders own 2.50% of the company’s stock.

The firm also recently disclosed a quarterly dividend, which will be paid on Tuesday, June 21st. Investors of record on Monday, June 6th will be paid a $0.13 dividend. This represents a $0.52 annualized dividend and a yield of 1.41%. The ex-dividend date is Friday, June 3rd. Terex’s dividend payout ratio (DPR) is presently 15.85%.

About Terex (Get Rating) 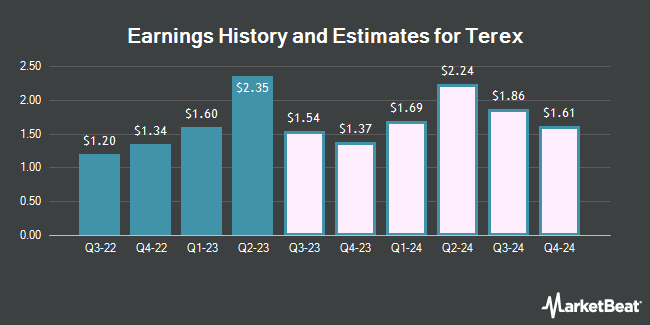