Brokerages expect Twitter, Inc. (NYSE:TWTR – Get Rating) to post $0.29 earnings per share (EPS) for the current fiscal quarter, according to Zacks Investment Research. Nine analysts have provided estimates for Twitter’s earnings. The lowest EPS estimate is $0.05 and the highest is $1.28. Twitter posted earnings of $0.20 per share during the same quarter last year, which would indicate a positive year-over-year growth rate of 45%. The company is expected to announce its next earnings results on Monday, January 1st.

On average, analysts expect that Twitter will report full-year earnings of $1.86 per share for the current financial year, with EPS estimates ranging from $0.53 to $4.96. For the next year, analysts forecast that the company will report earnings of $1.09 per share, with EPS estimates ranging from $0.66 to $1.49. Zacks’ EPS averages are a mean average based on a survey of research analysts that that provide coverage for Twitter.

Twitter (NYSE:TWTR – Get Rating) last released its quarterly earnings data on Thursday, April 28th. The social networking company reported $0.90 EPS for the quarter, beating the consensus estimate of $0.03 by $0.87. Twitter had a return on equity of 3.77% and a net margin of 4.27%. The company had revenue of $1.20 billion for the quarter, compared to analysts’ expectations of $1.23 billion. During the same period last year, the firm posted $0.06 earnings per share. Twitter’s revenue was up 15.9% compared to the same quarter last year.

Twitter declared that its board has initiated a share buyback plan on Thursday, February 10th that allows the company to buyback $4.00 billion in shares. This buyback authorization allows the social networking company to buy up to 14% of its stock through open market purchases. Stock buyback plans are generally an indication that the company’s leadership believes its shares are undervalued. 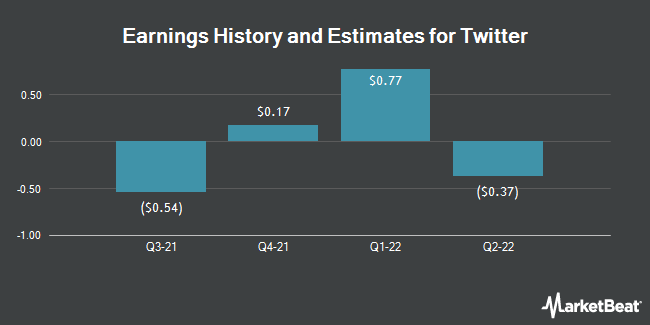