A number of research analysts have commented on NEM shares. Jefferies Financial Group increased their target price on Newmont from $67.00 to $72.00 and gave the stock a “hold” rating in a report on Wednesday, March 9th. StockNews.com began coverage on shares of Newmont in a research note on Thursday, March 31st. They set a “hold” rating on the stock. Credit Suisse Group lowered Newmont from an “outperform” rating to a “neutral” rating in a report on Tuesday, April 19th. Raymond James reduced their target price on shares of Newmont from $92.00 to $88.00 and set an “outperform” rating for the company in a report on Monday, April 25th. Finally, Bank of America lifted their price target on Newmont from $70.00 to $75.00 in a research note on Monday, February 28th.

Newmont (NYSE:NEM – Get Rating) last announced its quarterly earnings data on Friday, April 22nd. The basic materials company reported $0.69 EPS for the quarter, missing analysts’ consensus estimates of $0.71 by ($0.02). The business had revenue of $3.02 billion during the quarter, compared to analysts’ expectations of $3.06 billion. Newmont had a net margin of 8.53% and a return on equity of 10.24%. Newmont’s revenue for the quarter was up 5.3% on a year-over-year basis. During the same period in the prior year, the firm earned $0.74 EPS. On average, analysts forecast that Newmont will post 3.46 EPS for the current fiscal year.

The company also recently declared a quarterly dividend, which will be paid on Thursday, June 16th. Shareholders of record on Thursday, June 2nd will be issued a $0.55 dividend. The ex-dividend date of this dividend is Wednesday, June 1st. This represents a $2.20 annualized dividend and a yield of 3.24%. Newmont’s dividend payout ratio (DPR) is 167.94%.

About Newmont (Get Rating)

Newmont Corporation engages in the production and exploration of gold. It also explores for copper, silver, zinc, and lead. The company has operations and/or assets in the United States, Canada, Mexico, Dominican Republic, Peru, Suriname, Argentina, Chile, Australia, and Ghana. As of December 31, 2021, it had proven and probable gold reserves of 92.8 million ounces and land position of 62,800 square kilometers. 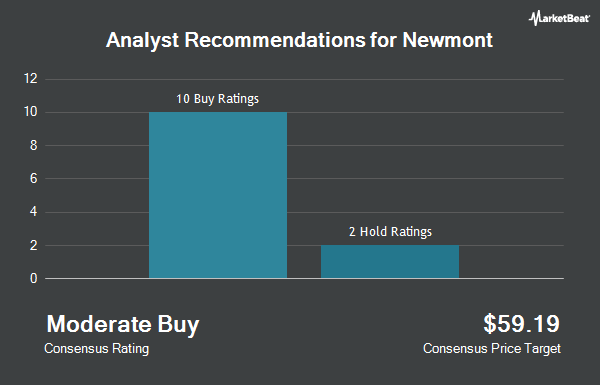 Receive News & Ratings for Newmont Daily - Enter your email address below to receive a concise daily summary of the latest news and analysts' ratings for Newmont and related companies with MarketBeat.com's FREE daily email newsletter.

Complete the form below to receive the latest headlines and analysts' recommendations for Newmont with our free daily email newsletter: