$4.98 Billion in Sales Expected for The Charles Schwab Co. (NYSE:SCHW) This Quarter

Analysts expect The Charles Schwab Co. (NYSE:SCHW – Get Rating) to report sales of $4.98 billion for the current quarter, according to Zacks Investment Research. Five analysts have made estimates for Charles Schwab’s earnings. The highest sales estimate is $5.10 billion and the lowest is $4.84 billion. Charles Schwab posted sales of $4.53 billion in the same quarter last year, which would indicate a positive year-over-year growth rate of 9.9%. The business is scheduled to report its next quarterly earnings results on Monday, January 1st.

On average, analysts expect that Charles Schwab will report full year sales of $20.97 billion for the current year, with estimates ranging from $20.39 billion to $22.17 billion. For the next fiscal year, analysts anticipate that the business will report sales of $24.87 billion, with estimates ranging from $23.71 billion to $27.00 billion. Zacks Investment Research’s sales calculations are an average based on a survey of sell-side analysts that that provide coverage for Charles Schwab.

Charles Schwab (NYSE:SCHW – Get Rating) last issued its earnings results on Monday, April 18th. The financial services provider reported $0.77 EPS for the quarter, missing the consensus estimate of $0.85 by ($0.08). The firm had revenue of $4.67 billion during the quarter, compared to analyst estimates of $4.82 billion. Charles Schwab had a return on equity of 13.67% and a net margin of 31.24%. Charles Schwab’s revenue was down .9% compared to the same quarter last year. During the same quarter in the previous year, the business posted $0.84 EPS.

The business also recently announced a quarterly dividend, which was paid on Friday, May 27th. Shareholders of record on Friday, May 13th were paid a dividend of $0.20 per share. The ex-dividend date of this dividend was Thursday, May 12th. This represents a $0.80 annualized dividend and a yield of 1.19%. Charles Schwab’s payout ratio is 28.99%.

In other news, CEO Walter W. Bettinger bought 63,188 shares of the firm’s stock in a transaction on Friday, April 29th. The stock was bought at an average cost of $67.07 per share, for a total transaction of $4,238,019.16. Following the completion of the acquisition, the chief executive officer now directly owns 432,625 shares in the company, valued at approximately $29,016,158.75. The purchase was disclosed in a document filed with the SEC, which is available at this link. Also, CFO Peter B. Crawford sold 3,114 shares of the firm’s stock in a transaction dated Wednesday, March 16th. The stock was sold at an average price of $87.01, for a total transaction of $270,949.14. The disclosure for this sale can be found here. In the last three months, insiders have acquired 104,169 shares of company stock worth $7,081,708. 6.90% of the stock is owned by corporate insiders. 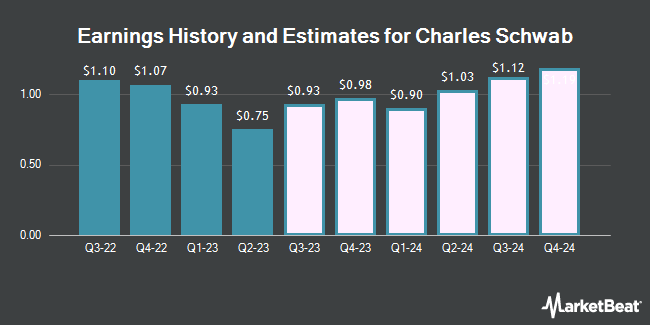