Shares of FMC Co. (NYSE:FMC – Get Rating) have been given a consensus rating of “Hold” by the eighteen analysts that are covering the firm, Marketbeat reports. Two analysts have rated the stock with a sell rating, six have issued a hold rating and eight have assigned a buy rating to the company. The average 1-year target price among brokers that have issued ratings on the stock in the last year is $129.14.

FMC (NYSE:FMC – Get Rating) last released its earnings results on Monday, May 2nd. The basic materials company reported $1.88 earnings per share (EPS) for the quarter, topping analysts’ consensus estimates of $1.69 by $0.19. FMC had a return on equity of 30.30% and a net margin of 14.64%. The business had revenue of $1.35 billion during the quarter, compared to the consensus estimate of $1.28 billion. During the same period last year, the business posted $1.53 earnings per share. On average, sell-side analysts forecast that FMC will post 7.64 earnings per share for the current year.

FMC announced that its Board of Directors has approved a share buyback plan on Tuesday, February 8th that permits the company to repurchase $1.00 billion in outstanding shares. This repurchase authorization permits the basic materials company to buy up to 7.1% of its stock through open market purchases. Stock repurchase plans are typically an indication that the company’s leadership believes its shares are undervalued.

The company also recently disclosed a quarterly dividend, which will be paid on Thursday, July 21st. Stockholders of record on Thursday, June 30th will be issued a $0.53 dividend. This represents a $2.12 dividend on an annualized basis and a dividend yield of 1.78%. The ex-dividend date of this dividend is Wednesday, June 29th. FMC’s dividend payout ratio is presently 35.69%.

In related news, insider Nicholas Pfeiffer sold 2,181 shares of the stock in a transaction that occurred on Friday, March 11th. The shares were sold at an average price of $123.65, for a total value of $269,680.65. The sale was disclosed in a filing with the SEC, which is available at the SEC website. 0.57% of the stock is currently owned by corporate insiders. 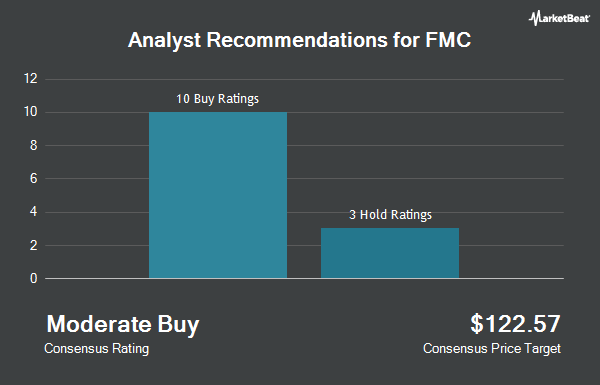