Smartsheet (NYSE:SMAR – Get Rating) last issued its quarterly earnings results on Tuesday, March 15th. The company reported ($0.40) earnings per share (EPS) for the quarter, beating the consensus estimate of ($0.43) by $0.03. The business had revenue of $157.39 million during the quarter, compared to analysts’ expectations of $151.60 million. Smartsheet had a negative return on equity of 29.45% and a negative net margin of 31.06%. The firm’s revenue for the quarter was up 43.2% compared to the same quarter last year. During the same period in the previous year, the company posted ($0.21) earnings per share. On average, equities research analysts expect that Smartsheet will post -1.59 EPS for the current year.

In related news, Director Matthew S. Mcilwain acquired 10,000 shares of the firm’s stock in a transaction that occurred on Friday, March 18th. The stock was acquired at an average cost of $49.62 per share, for a total transaction of $496,200.00. The acquisition was disclosed in a filing with the Securities & Exchange Commission, which can be accessed through the SEC website. Also, Director Geoffrey T. Barker sold 1,125 shares of the stock in a transaction on Monday, April 25th. The shares were sold at an average price of $50.00, for a total value of $56,250.00. Following the completion of the sale, the director now owns 315,131 shares of the company’s stock, valued at $15,756,550. The disclosure for this sale can be found here. Insiders sold a total of 23,703 shares of company stock valued at $1,301,076 over the last quarter. 4.58% of the stock is owned by corporate insiders.

About Smartsheet (Get Rating) 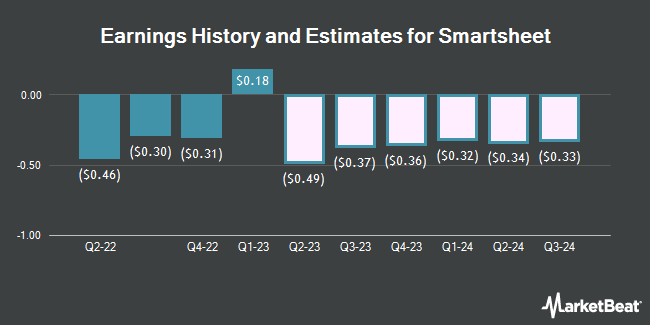