Take-Two Interactive Software (NASDAQ:TTWO – Get Rating) had its price target boosted by investment analysts at Wedbush from $145.00 to $162.00 in a research note issued on Wednesday, The Fly reports. Wedbush’s price target would indicate a potential upside of 23.05% from the stock’s current price.

Take-Two Interactive Software (NASDAQ:TTWO – Get Rating) last released its earnings results on Monday, May 16th. The company reported $0.95 EPS for the quarter, topping the consensus estimate of $0.70 by $0.25. Take-Two Interactive Software had a net margin of 11.93% and a return on equity of 12.63%. The firm had revenue of $845.78 million for the quarter, compared to the consensus estimate of $884.62 million. During the same quarter in the previous year, the firm earned $1.66 earnings per share. The company’s quarterly revenue was up 7.8% compared to the same quarter last year. As a group, sell-side analysts predict that Take-Two Interactive Software will post 3.33 earnings per share for the current fiscal year.

In other Take-Two Interactive Software news, President Karl Slatoff sold 152,373 shares of the business’s stock in a transaction dated Wednesday, April 13th. The shares were sold at an average price of $138.64, for a total value of $21,124,992.72. Following the completion of the sale, the president now directly owns 437,067 shares of the company’s stock, valued at approximately $60,594,968.88. The transaction was disclosed in a filing with the SEC, which is available through this link. Company insiders own 0.90% of the company’s stock. 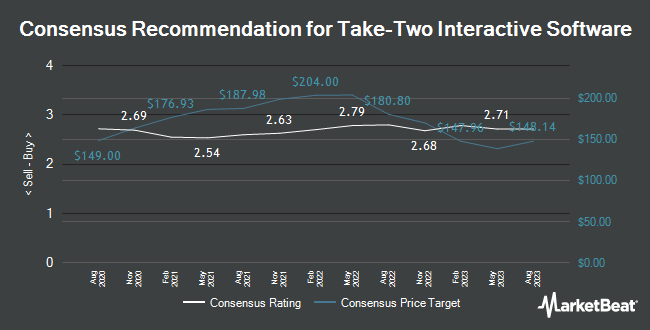 Complete the form below to receive the latest headlines and analysts' recommendations for Take-Two Interactive Software with our free daily email newsletter: