Wall Street brokerages expect IMV Inc. (NASDAQ:IMV – Get Rating) to report earnings of ($0.13) per share for the current quarter, according to Zacks Investment Research. Zero analysts have made estimates for IMV’s earnings. IMV posted earnings of ($0.11) per share in the same quarter last year, which indicates a negative year over year growth rate of 18.2%. The company is scheduled to announce its next quarterly earnings report on Monday, January 1st.

According to Zacks, analysts expect that IMV will report full year earnings of ($0.37) per share for the current financial year, with EPS estimates ranging from ($0.51) to ($0.27). For the next financial year, analysts forecast that the firm will report earnings of ($0.41) per share, with EPS estimates ranging from ($0.69) to ($0.27). Zacks Investment Research’s EPS calculations are an average based on a survey of research firms that that provide coverage for IMV.

A number of equities analysts recently commented on the company. Zacks Investment Research upgraded IMV from a “strong sell” rating to a “hold” rating in a research report on Tuesday, May 17th. Raymond James lowered their price target on IMV from $1.75 to $1.50 and set a “market perform” rating on the stock in a report on Friday, March 18th. Finally, Echelon Wealth Partners reissued a “buy” rating on shares of IMV in a research note on Friday, May 13th. Two investment analysts have rated the stock with a hold rating and three have assigned a buy rating to the company’s stock. According to data from MarketBeat.com, the stock presently has a consensus rating of “Buy” and a consensus target price of $2.22.

IMV Inc operates as a clinical-stage immuno-oncology company. The company develops a portfolio of therapies based on DPX its immune-educating technology platform for treatment of solid and hematological cancers. The company's lead drug candidate includes maveropepimut-S, a DPX-based immunotherapy that targets survivin-expressing cells that is Phase II clinical trials for diffuse large B cell lymphoma; ovarian cancer; and bladder, liver, and microsatellite instability high tumors, as well as in Phase I clinical trial for breast cancer. 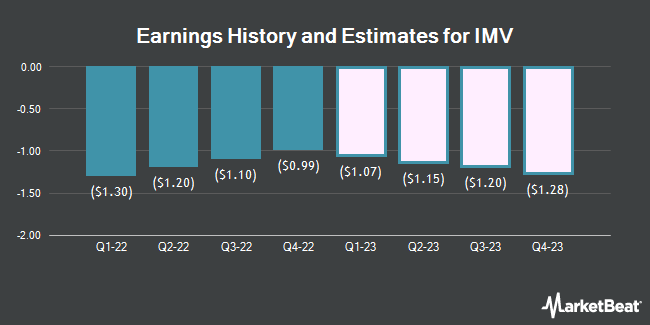 Receive News & Ratings for IMV Daily - Enter your email address below to receive a concise daily summary of the latest news and analysts' ratings for IMV and related companies with MarketBeat.com's FREE daily email newsletter.

Complete the form below to receive the latest headlines and analysts' recommendations for IMV with our free daily email newsletter: