Cellnex Telecom (OTCMKTS:CLLNY – Get Rating) was upgraded by investment analysts at Citigroup from a “neutral” rating to a “buy” rating in a research note issued to investors on Thursday, The Fly reports.

Several other equities research analysts also recently issued reports on CLLNY. JPMorgan Chase & Co. raised their price objective on shares of Cellnex Telecom from €65.00 ($69.89) to €66.00 ($70.97) in a research report on Friday, April 29th. Redburn Partners downgraded shares of Cellnex Telecom from a “buy” rating to a “neutral” rating in a research report on Tuesday, May 31st. Finally, Royal Bank of Canada dropped their price target on shares of Cellnex Telecom from €64.00 ($68.82) to €63.00 ($67.74) and set an “outperform” rating for the company in a research report on Monday, May 9th. One research analyst has rated the stock with a hold rating and six have assigned a buy rating to the company. Based on data from MarketBeat, the company has an average rating of “Buy” and a consensus target price of $64.67.

About Cellnex Telecom (Get Rating)

Cellnex Telecom SA engages in the operation of wireless telecommunications and broadcasting infrastructures. Its business activities include rental of sites for telecom operators, broadcast infrastructure activity, and other network services. It operates through the following geographical segments: Spain, Italy, Netherlands, France, Switzerland, and Other Countries. 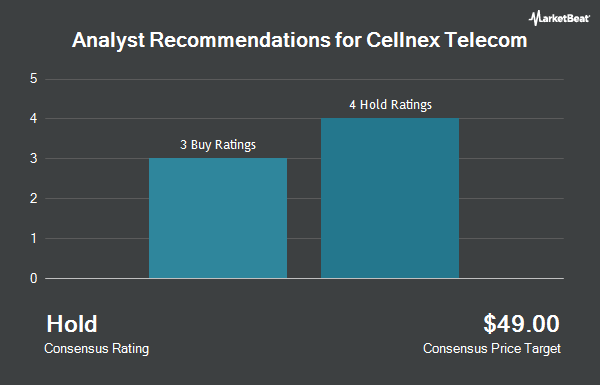 Complete the form below to receive the latest headlines and analysts' recommendations for Cellnex Telecom with our free daily email newsletter: