Hormel Foods Co. (NYSE:HRL – Get Rating) SVP Kevin L. Myers sold 5,000 shares of the firm’s stock in a transaction that occurred on Tuesday, June 7th. The stock was sold at an average price of $45.07, for a total value of $225,350.00. Following the completion of the sale, the senior vice president now directly owns 32,869 shares in the company, valued at approximately $1,481,405.83. The sale was disclosed in a document filed with the SEC, which is available at this hyperlink.

Hormel Foods (NYSE:HRL – Get Rating) last released its quarterly earnings data on Thursday, June 2nd. The company reported $0.48 earnings per share (EPS) for the quarter, beating analysts’ consensus estimates of $0.47 by $0.01. The firm had revenue of $3.10 billion during the quarter, compared to analysts’ expectations of $3.07 billion. Hormel Foods had a return on equity of 14.10% and a net margin of 7.70%. The business’s revenue for the quarter was up 18.8% on a year-over-year basis. During the same quarter last year, the firm earned $0.42 earnings per share. Research analysts anticipate that Hormel Foods Co. will post 1.89 earnings per share for the current fiscal year.

The company also recently declared a quarterly dividend, which will be paid on Monday, August 15th. Investors of record on Monday, July 11th will be paid a dividend of $0.26 per share. The ex-dividend date of this dividend is Friday, July 8th. This represents a $1.04 annualized dividend and a yield of 2.26%. Hormel Foods’s dividend payout ratio is 59.43%.

Several analysts have weighed in on HRL shares. Credit Suisse Group cut their target price on Hormel Foods to $44.00 in a research note on Friday, June 3rd. StockNews.com began coverage on Hormel Foods in a research note on Thursday, March 31st. They set a “hold” rating on the stock. Piper Sandler lowered their price target on Hormel Foods to $48.00 in a research report on Friday, June 3rd. Argus upgraded Hormel Foods from a “hold” rating to a “buy” rating and set a $57.00 target price on the stock in a report on Thursday, March 10th. Finally, JPMorgan Chase & Co. lifted their price target on Hormel Foods from $46.00 to $48.00 and gave the company a “neutral” rating in a report on Wednesday, March 2nd. One analyst has rated the stock with a sell rating, six have assigned a hold rating and one has issued a buy rating to the company’s stock. Based on data from MarketBeat.com, the company presently has an average rating of “Hold” and a consensus price target of $47.83. 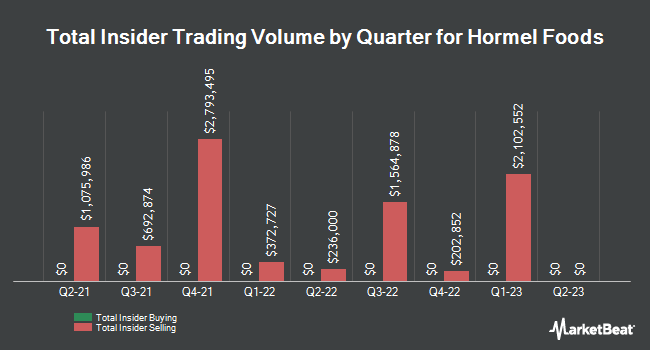