Nextdoor (NYSE:KIND – Get Rating) had its target price lowered by investment analysts at Citigroup from $6.50 to $4.50 in a report issued on Thursday, Stock Target Advisor reports. The brokerage presently has a “neutral” rating on the stock.

Nextdoor (NYSE:KIND – Get Rating) last released its earnings results on Tuesday, May 10th. The company reported -0.09 earnings per share for the quarter, beating the consensus estimate of -0.14 by 0.05. The company had revenue of 51.00 million for the quarter, compared to analysts’ expectations of 48.40 million. Analysts expect that Nextdoor will post -0.3 EPS for the current fiscal year.

Nextdoor Holdings, Inc operates as the neighborhood network that connects neighbors, businesses, and public services in the United States and internationally. It enables small and mid-sized businesses, large brands, public agencies, and nonprofits to receive information, give and get help, and build connections. 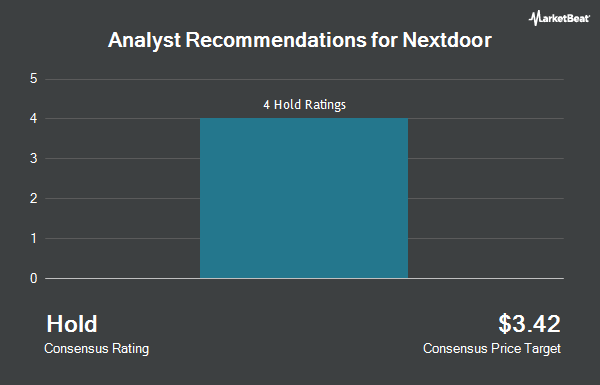 Receive News & Ratings for Nextdoor Daily - Enter your email address below to receive a concise daily summary of the latest news and analysts' ratings for Nextdoor and related companies with MarketBeat.com's FREE daily email newsletter.

Complete the form below to receive the latest headlines and analysts' recommendations for Nextdoor with our free daily email newsletter: