Wall Street brokerages forecast that Norwegian Cruise Line Holdings Ltd. (NYSE:NCLH – Get Rating) will post $1.18 billion in sales for the current quarter, Zacks Investment Research reports. Four analysts have provided estimates for Norwegian Cruise Line’s earnings, with the highest sales estimate coming in at $1.41 billion and the lowest estimate coming in at $842.85 million. Norwegian Cruise Line reported sales of $4.37 million in the same quarter last year, which indicates a positive year-over-year growth rate of 26,902.3%. The business is expected to announce its next quarterly earnings results on Monday, January 1st.

On average, analysts expect that Norwegian Cruise Line will report full-year sales of $5.03 billion for the current financial year, with estimates ranging from $3.91 billion to $5.68 billion. For the next financial year, analysts anticipate that the business will report sales of $7.47 billion, with estimates ranging from $6.14 billion to $8.02 billion. Zacks Investment Research’s sales averages are an average based on a survey of research analysts that that provide coverage for Norwegian Cruise Line.

In other news, Director Russell W. Galbut purchased 100,000 shares of the stock in a transaction that occurred on Monday, May 23rd. The stock was acquired at an average cost of $15.12 per share, with a total value of $1,512,000.00. Following the acquisition, the director now owns 489,917 shares in the company, valued at $7,407,545.04. The acquisition was disclosed in a legal filing with the SEC, which is available at the SEC website. 0.94% of the stock is currently owned by company insiders.

About Norwegian Cruise Line (Get Rating) 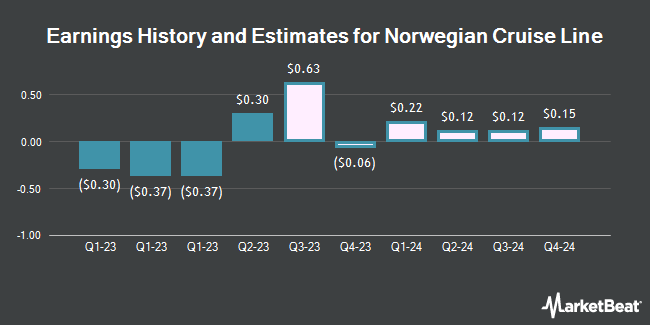