On average, analysts expect that Atara Biotherapeutics will report full year sales of $53.28 million for the current year, with estimates ranging from $25.31 million to $75.30 million. For the next year, analysts forecast that the company will report sales of $82.67 million, with estimates ranging from $29.34 million to $136.00 million. Zacks’ sales calculations are a mean average based on a survey of sell-side research analysts that that provide coverage for Atara Biotherapeutics.

Atara Biotherapeutics (NASDAQ:ATRA – Get Rating) last posted its quarterly earnings results on Thursday, May 5th. The biotechnology company reported ($0.87) earnings per share for the quarter, topping the consensus estimate of ($0.98) by $0.11. Atara Biotherapeutics had a negative return on equity of 122.18% and a negative net margin of 1,451.79%. During the same period in the previous year, the company earned ($0.86) earnings per share.

Atara Biotherapeutics, Inc, an off-the-shelf T-cell immunotherapy company, develops treatments for patients with cancer, autoimmune, and viral diseases in the United States. It is developing tabelecleucel, a T-cell immunotherapy that is Phase 3 clinical trials for the treatment of epstein-barr virus (EBV) driven post-transplant lymphoproliferative disease, as well as hematologic and solid tumors, including nasopharyngeal carcinoma. 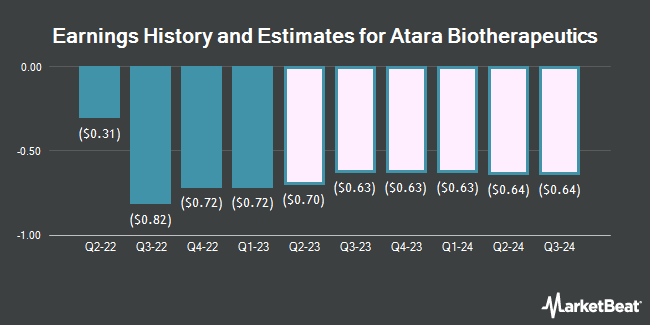 Complete the form below to receive the latest headlines and analysts' recommendations for Atara Biotherapeutics with our free daily email newsletter: