Ardelyx, Inc. (NASDAQ:ARDX) Given Consensus Rating of “Hold” by Brokerages

Ardelyx, Inc. (NASDAQ:ARDX – Get Rating) has earned an average rating of “Hold” from the nine brokerages that are presently covering the company, MarketBeat.com reports. One equities research analyst has rated the stock with a sell recommendation, three have issued a hold recommendation and four have issued a buy recommendation on the company. The average twelve-month target price among brokers that have updated their coverage on the stock in the last year is $5.24.

Ardelyx (NASDAQ:ARDX – Get Rating) last announced its quarterly earnings results on Thursday, May 5th. The biopharmaceutical company reported ($0.21) EPS for the quarter, topping analysts’ consensus estimates of ($0.22) by $0.01. Ardelyx had a negative net margin of 3,843.36% and a negative return on equity of 177.07%. During the same quarter in the previous year, the business earned ($0.34) earnings per share. On average, analysts expect that Ardelyx will post -0.72 earnings per share for the current fiscal year.

About Ardelyx (Get Rating)

Ardelyx, Inc, a biopharmaceutical company, discovers, develops, and commercializes medicines to treat gastrointestinal and cardiorenal therapeutic areas in the United States and internationally. The company's lead product candidate is tenapanor, which has completed Phase III clinical trial for the treatment of patients with irritable bowel syndrome with constipation, as well as in Phase III clinical trial to control serum phosphorus in adult patients with chronic kidney disease (CKD)on dialysis, or hyperphosphatemia. 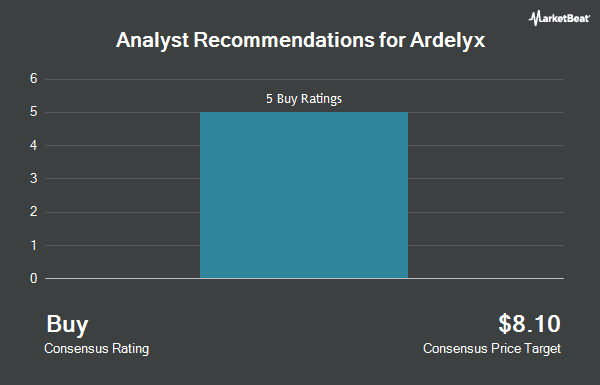 Receive News & Ratings for Ardelyx Daily - Enter your email address below to receive a concise daily summary of the latest news and analysts' ratings for Ardelyx and related companies with MarketBeat.com's FREE daily email newsletter.

Complete the form below to receive the latest headlines and analysts' recommendations for Ardelyx with our free daily email newsletter: