NIO (NYSE:NIO – Get Rating) had its target price decreased by research analysts at Mizuho from $60.00 to $55.00 in a research report issued on Friday, The Fly reports. Mizuho’s target price would suggest a potential upside of 192.24% from the stock’s previous close.

NIO (NYSE:NIO – Get Rating) last released its quarterly earnings data on Thursday, June 9th. The company reported ($0.79) earnings per share for the quarter, topping analysts’ consensus estimates of ($1.03) by $0.24. NIO had a negative return on equity of 37.30% and a negative net margin of 29.03%. The company had revenue of $9.91 billion for the quarter, compared to analyst estimates of $9.86 billion. During the same quarter in the previous year, the company posted ($0.48) earnings per share. The firm’s revenue for the quarter was up 24.2% compared to the same quarter last year. As a group, sell-side analysts forecast that NIO will post -0.63 EPS for the current year.

About NIO (Get Rating)

NIO Inc designs, manufactures, and sells electric vehicles in the People's Republic of China. The company is also involved in the manufacture of e-powertrain, battery packs, and components; and racing management, technology development, and sales and after-sales management activities. In addition, it offers power solutions for battery charging needs; and other value-added services. 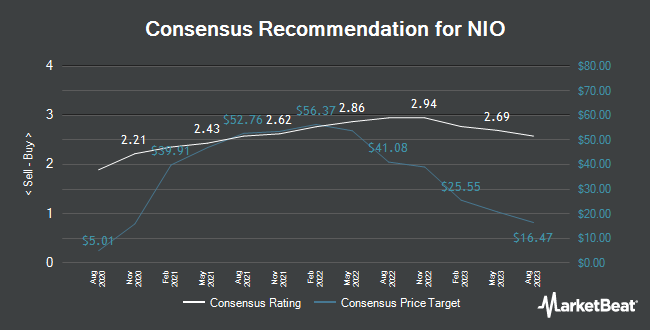 Receive News & Ratings for NIO Daily - Enter your email address below to receive a concise daily summary of the latest news and analysts' ratings for NIO and related companies with MarketBeat.com's FREE daily email newsletter.

Complete the form below to receive the latest headlines and analysts' recommendations for NIO with our free daily email newsletter: