Poshmark (NASDAQ:POSH – Get Rating) last announced its earnings results on Thursday, May 12th. The clothing resale marketplace reported ($0.18) earnings per share for the quarter, beating the consensus estimate of ($0.26) by $0.08. Poshmark had a negative return on equity of 9.37% and a negative net margin of 11.59%. The business had revenue of $90.90 million during the quarter, compared to analysts’ expectations of $87.66 million. During the same quarter last year, the business posted ($0.33) earnings per share. The company’s quarterly revenue was up 12.3% on a year-over-year basis. On average, equities research analysts expect that Poshmark will post -0.97 earnings per share for the current year.

About Poshmark (Get Rating)

Poshmark, Inc operates as a social marketplace for new and secondhand style products in the United States, Canada, India, and Australia. The company offers apparel, footwear, home, beauty, and pet products, as well as accessories. As of December 31, 2021, it had 7.6 million active buyers. The company was formerly known as GoshPosh, Inc and changed its name to Poshmark, Inc in 2011. 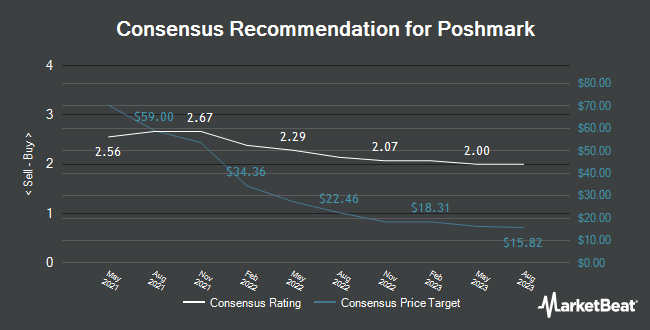 Receive News & Ratings for Poshmark Daily - Enter your email address below to receive a concise daily summary of the latest news and analysts' ratings for Poshmark and related companies with MarketBeat.com's FREE daily email newsletter.

Complete the form below to receive the latest headlines and analysts' recommendations for Poshmark with our free daily email newsletter: