LyondellBasell Industries (NYSE:LYB – Get Rating) last issued its quarterly earnings data on Friday, April 29th. The specialty chemicals company reported $4.00 earnings per share (EPS) for the quarter, topping analysts’ consensus estimates of $3.48 by $0.52. LyondellBasell Industries had a net margin of 11.68% and a return on equity of 54.14%. The firm had revenue of $13.16 billion for the quarter, compared to the consensus estimate of $12.67 billion. During the same quarter in the previous year, the firm earned $3.18 EPS. The company’s quarterly revenue was up 44.9% compared to the same quarter last year.

In related news, Director Jagjeet S. Bindra sold 2,640 shares of the business’s stock in a transaction on Tuesday, June 7th. The shares were sold at an average price of $111.44, for a total value of $294,201.60. Following the completion of the transaction, the director now directly owns 7,020 shares in the company, valued at approximately $782,308.80. The transaction was disclosed in a document filed with the SEC, which is accessible through the SEC website. Insiders own 0.18% of the company’s stock.

About LyondellBasell Industries (Get Rating) 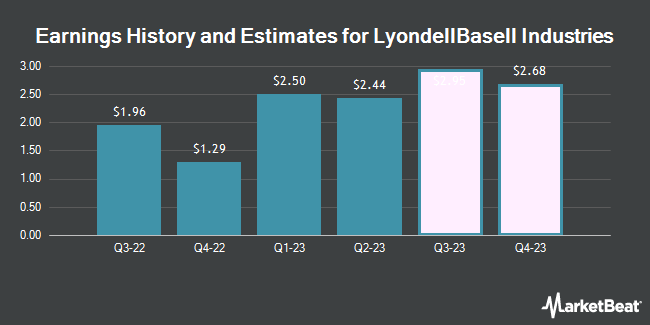