Backblaze, Inc. (NASDAQ:BLZE – Get Rating) major shareholder Charles J. Jones sold 2,000 shares of the business’s stock in a transaction dated Monday, June 13th. The stock was sold at an average price of 5.17, for a total transaction of 10,340.00. Following the transaction, the insider now owns 516,000 shares in the company, valued at approximately 2,667,720. The transaction was disclosed in a legal filing with the SEC, which is accessible through the SEC website. Major shareholders that own 10% or more of a company’s shares are required to disclose their transactions with the SEC.

Backblaze (NASDAQ:BLZE – Get Rating) last announced its earnings results on Thursday, May 5th. The company reported -0.41 earnings per share (EPS) for the quarter, missing analysts’ consensus estimates of -0.37 by -0.04. The firm had revenue of 19.49 million for the quarter, compared to the consensus estimate of 19.31 million. Sell-side analysts forecast that Backblaze, Inc. will post -1.62 EPS for the current fiscal year.

Backblaze, Inc, a storage cloud platform, provides businesses and consumers cloud services to store, use, and protect data in the United States and internationally. The company offers cloud services through a web-scale software infrastructure built on commodity hardware. It also provides Backblaze B2 Cloud Storage, which enables customers to store data, developers to build applications, and partners to expand their use cases. 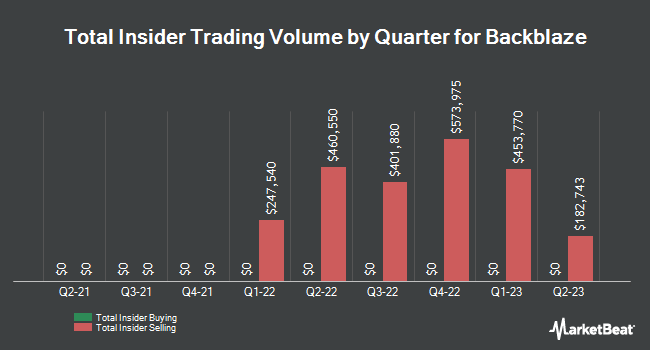 Complete the form below to receive the latest headlines and analysts' recommendations for Backblaze with our free daily email newsletter: