Shares of BJ’s Wholesale Club Holdings, Inc. (NYSE:BJ – Get Rating) have been given an average recommendation of “Hold” by the eighteen research firms that are covering the stock, MarketBeat reports. One investment analyst has rated the stock with a sell rating, six have issued a hold rating and eight have issued a buy rating on the company. The average 12 month target price among analysts that have updated their coverage on the stock in the last year is $65.64.

BJ’s Wholesale Club (NYSE:BJ – Get Rating) last posted its quarterly earnings results on Thursday, May 19th. The company reported $0.87 EPS for the quarter, beating analysts’ consensus estimates of $0.72 by $0.15. BJ’s Wholesale Club had a net margin of 2.65% and a return on equity of 77.13%. The company had revenue of $4.50 billion during the quarter, compared to analyst estimates of $4.24 billion. During the same period in the prior year, the business posted $0.72 EPS. The firm’s revenue was up 16.2% compared to the same quarter last year. As a group, analysts anticipate that BJ’s Wholesale Club will post 3.31 EPS for the current year.

In other news, Director Kenneth M. Parent sold 35,004 shares of BJ’s Wholesale Club stock in a transaction that occurred on Tuesday, April 5th. The shares were sold at an average price of $67.42, for a total transaction of $2,359,969.68. Following the sale, the director now owns 14,143 shares in the company, valued at $953,521.06. The transaction was disclosed in a document filed with the SEC, which is available at this link. 2.10% of the stock is currently owned by company insiders.

BJ's Wholesale Club Holdings, Inc, together with its subsidiaries, operates warehouse clubs on the east coast of the United States. It provides perishable, general merchandise, gasoline, and other ancillary services. The company sells its products through the websites BJs.com, BerkleyJensen.com, Wellsleyfarms.com, and Delivery.bjs.com as well as the mobile app. 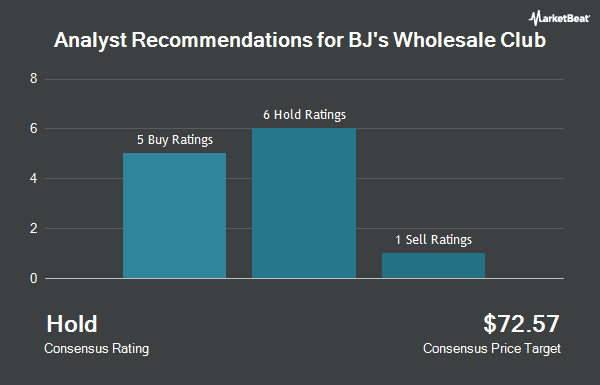 Complete the form below to receive the latest headlines and analysts' recommendations for BJ's Wholesale Club with our free daily email newsletter: