Jackson Financial Inc. (NYSE:JXN – Get Rating) Director Gregory T. Durant purchased 3,000 shares of the company’s stock in a transaction dated Wednesday, June 15th. The shares were bought at an average cost of $29.10 per share, for a total transaction of $87,300.00. Following the acquisition, the director now owns 17,179 shares in the company, valued at $499,908.90. The transaction was disclosed in a legal filing with the SEC, which is available through this link.

Jackson Financial (NYSE:JXN – Get Rating) last released its quarterly earnings data on Tuesday, May 10th. The company reported $3.94 earnings per share (EPS) for the quarter, missing the consensus estimate of $4.53 by ($0.59). The company had revenue of $4.30 billion for the quarter, compared to the consensus estimate of $1.80 billion. Jackson Financial had a net margin of 29.79% and a return on equity of 20.22%. Sell-side analysts forecast that Jackson Financial Inc. will post 19.27 earnings per share for the current fiscal year.

The firm also recently announced a quarterly dividend, which was paid on Thursday, June 16th. Investors of record on Thursday, June 2nd were issued a $0.55 dividend. This represents a $2.20 dividend on an annualized basis and a dividend yield of 7.65%. The ex-dividend date of this dividend was Wednesday, June 1st. Jackson Financial’s dividend payout ratio (DPR) is presently 8.74%. 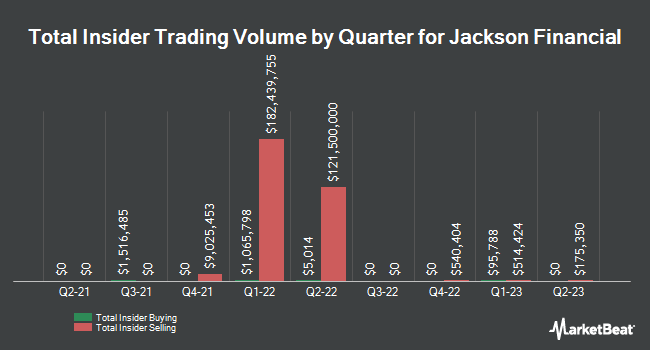 Head to Head Contrast: iHeartMedia versus The Competition