Taylor Morrison Home (NYSE:TMHC – Get Rating) last announced its quarterly earnings results on Wednesday, April 27th. The construction company reported $1.44 EPS for the quarter, beating the consensus estimate of $1.26 by $0.18. Taylor Morrison Home had a return on equity of 19.17% and a net margin of 9.53%. The business had revenue of $1.70 billion for the quarter, compared to analyst estimates of $1.65 billion. During the same quarter in the prior year, the company posted $0.75 EPS. The company’s quarterly revenue was up 20.1% on a year-over-year basis.

About Taylor Morrison Home (Get Rating)

Taylor Morrison Home Corporation, together with its subsidiaries, operates as a public homebuilder in the United States. The company designs, builds, and sells single and multi-family detached and attached homes; and develops lifestyle and master-planned communities. It also develops and constructs multi-use properties consisting of commercial space, retail, and multi-family properties under the Urban Form brand name; and offers title insurance and closing settlement services, as well as financial services. 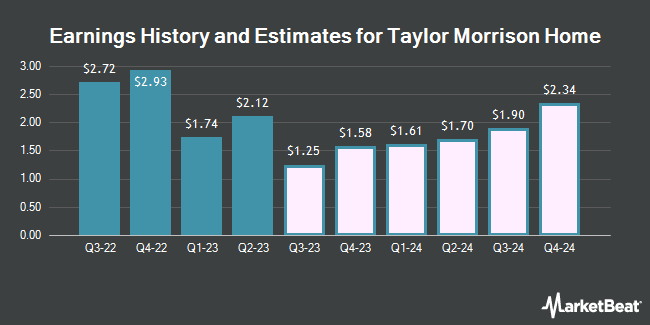 iHeartMedia and Its Rivals Head to Head Contrast

Complete the form below to receive the latest headlines and analysts' recommendations for Taylor Morrison Home with our free daily email newsletter: