Performance Food Group (NYSE:PFGC – Get Rating) last issued its quarterly earnings data on Wednesday, May 11th. The food distribution company reported $0.51 earnings per share (EPS) for the quarter, meeting the consensus estimate of $0.51. Performance Food Group had a return on equity of 10.51% and a net margin of 0.15%. During the same period in the prior year, the company earned $0.19 EPS.

In related news, insider Patrick T. Hagerty sold 500 shares of the business’s stock in a transaction that occurred on Friday, April 1st. The shares were sold at an average price of $51.06, for a total value of $25,530.00. Following the completion of the transaction, the insider now owns 148,325 shares in the company, valued at approximately $7,573,474.50. The transaction was disclosed in a filing with the Securities & Exchange Commission, which is accessible through the SEC website. Insiders sold a total of 1,500 shares of company stock worth $71,965 over the last three months. 2.60% of the stock is owned by company insiders.

About Performance Food Group (Get Rating)

Performance Food Group Company, through its subsidiaries, markets and distributes food and food-related products in the United States. It operates through two segments, Foodservice and Vistar. The company offers a range of frozen foods, groceries, candy, snacks, beverages, cigarettes, and other tobacco products, as well as beef, pork, poultry, and seafood. 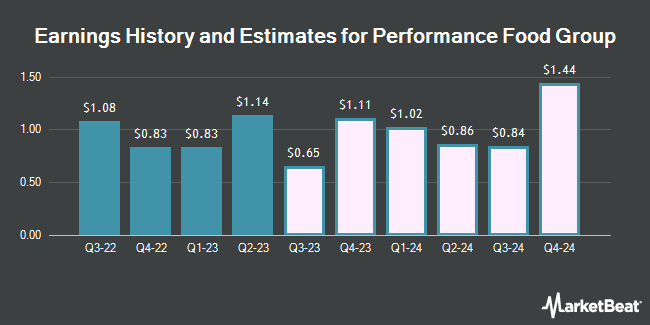 Complete the form below to receive the latest headlines and analysts' recommendations for Performance Food Group with our free daily email newsletter: