Ionis Pharmaceuticals (NASDAQ:IONS – Get Rating) had its price objective raised by equities research analysts at SVB Leerink from $26.00 to $27.00 in a research note issued on Tuesday, Stock Target Advisor reports. The firm presently has a “market perform” rating on the stock. SVB Leerink’s target price would suggest a potential downside of 28.53% from the stock’s previous close.

Ionis Pharmaceuticals (NASDAQ:IONS – Get Rating) last announced its quarterly earnings results on Wednesday, May 4th. The company reported ($0.46) earnings per share (EPS) for the quarter, beating the consensus estimate of ($0.68) by $0.22. The company had revenue of $142.00 million during the quarter, compared to analyst estimates of $122.46 million. Ionis Pharmaceuticals had a negative net margin of 0.36% and a negative return on equity of 0.46%. The firm’s revenue was up 26.8% on a year-over-year basis. During the same quarter in the previous year, the business earned ($0.64) EPS. On average, sell-side analysts anticipate that Ionis Pharmaceuticals will post -2.39 EPS for the current fiscal year.

In other news, EVP Patrick R. O’neil sold 6,792 shares of the company’s stock in a transaction that occurred on Tuesday, April 12th. The stock was sold at an average price of $40.06, for a total transaction of $272,087.52. Following the sale, the executive vice president now owns 34,536 shares in the company, valued at approximately $1,383,512.16. The sale was disclosed in a document filed with the SEC, which is available at the SEC website. Insiders have sold 7,525 shares of company stock valued at $302,085 over the last three months. Insiders own 2.36% of the company’s stock.

Ionis Pharmaceuticals, Inc discovers and develops RNA-targeted therapeutics in the United States. The company offers SPINRAZA for spinal muscular atrophy (SMA) in pediatric and adult patients; TEGSEDI, an injection for the treatment of polyneuropathy of hereditary transthyretin-mediated amyloidosis in adults; and WAYLIVRA, a treatment for familial chylomicronemia syndrome and familial partial lipodystrophy. 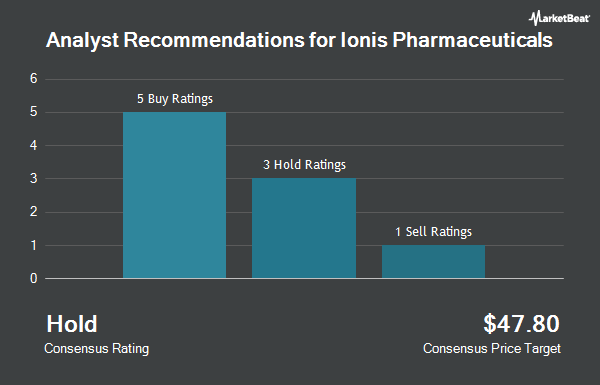