Lululemon Athletica Inc. (NASDAQ:LULU – Get Rating) has been given an average recommendation of “Buy” by the twenty-nine analysts that are presently covering the firm, Marketbeat reports. Six equities research analysts have rated the stock with a hold rating and thirteen have given a buy rating to the company. The average twelve-month price objective among analysts that have issued a report on the stock in the last year is $423.88.

Lululemon Athletica (NASDAQ:LULU – Get Rating) last released its quarterly earnings data on Thursday, June 2nd. The apparel retailer reported $1.48 EPS for the quarter, topping analysts’ consensus estimates of $1.43 by $0.05. Lululemon Athletica had a return on equity of 39.23% and a net margin of 15.36%. The business had revenue of $1.61 billion during the quarter, compared to the consensus estimate of $1.55 billion. During the same period in the prior year, the firm posted $1.16 EPS. The business’s revenue for the quarter was up 31.6% on a year-over-year basis. As a group, equities analysts expect that Lululemon Athletica will post 9.47 earnings per share for the current year.

Lululemon Athletica announced that its Board of Directors has initiated a stock repurchase plan on Tuesday, March 29th that permits the company to buyback $1.00 billion in outstanding shares. This buyback authorization permits the apparel retailer to repurchase up to 2.1% of its shares through open market purchases. Shares buyback plans are generally an indication that the company’s leadership believes its shares are undervalued.

About Lululemon Athletica (Get Rating) 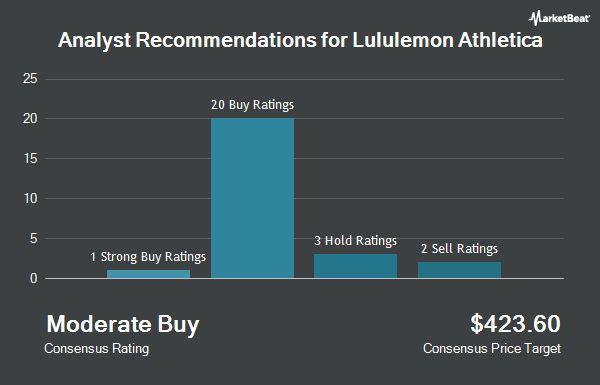 Establishment Labs Shares Gap Up to $54.38