Omega Flex, Inc. (NASDAQ:OFLX – Get Rating) announced a quarterly dividend on Friday, June 10th, Zacks reports. Stockholders of record on Friday, June 24th will be given a dividend of 0.32 per share by the industrial products company on Tuesday, July 5th. This represents a $1.28 dividend on an annualized basis and a dividend yield of 1.08%. The ex-dividend date of this dividend is Thursday, June 23rd. This is an increase from Omega Flex’s previous quarterly dividend of $0.30.

Omega Flex (NASDAQ:OFLX – Get Rating) last announced its earnings results on Thursday, April 21st. The industrial products company reported $0.54 earnings per share for the quarter. The company had revenue of $31.29 million during the quarter. Omega Flex had a return on equity of 43.67% and a net margin of 19.46%.

About Omega Flex (Get Rating)

Omega Flex, Inc, together with its subsidiaries, manufactures and sells flexible metal hoses and accessories in North America and internationally. It offers flexible gas piping for use in residential and commercial buildings, as well as its fittings; and corrugated medical tubing for use in hospitals, ambulatory care centers, dental, physician and veterinary clinics, laboratories, and other facilities. 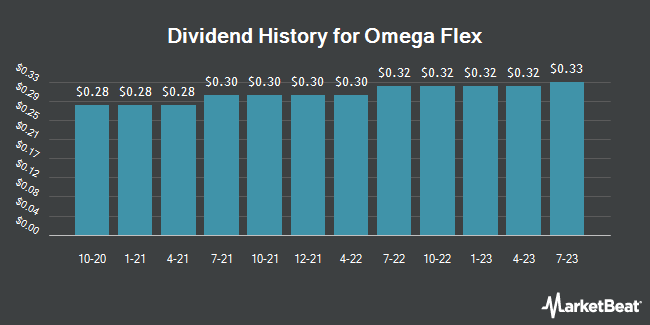 Complete the form below to receive the latest headlines and analysts' recommendations for Omega Flex with our free daily email newsletter: