Overseas Shipholding Group, Inc. (NYSE:OSG – Get Rating) Director Gary Eugene Taylor sold 20,000 shares of the firm’s stock in a transaction dated Friday, June 17th. The stock was sold at an average price of $2.06, for a total transaction of $41,200.00. Following the sale, the director now directly owns 182,841 shares in the company, valued at $376,652.46. The transaction was disclosed in a document filed with the SEC, which is available through this hyperlink.

Overseas Shipholding Group (NYSE:OSG – Get Rating) last released its quarterly earnings results on Monday, May 9th. The transportation company reported ($0.01) earnings per share for the quarter. The company had revenue of $104.00 million for the quarter. Overseas Shipholding Group had a negative return on equity of 7.19% and a negative net margin of 8.09%.

Separately, StockNews.com upgraded shares of Overseas Shipholding Group from a “buy” rating to a “strong-buy” rating in a report on Thursday, May 12th.

Overseas Shipholding Group, Inc, together with its subsidiaries, owns and operates a fleet of oceangoing vessels. Its vessels are engaged in the transportation of crude oil and petroleum products in the United States flag trade. As of December 31, 2021, the company owned or operated a fleet of 24 vessels totaling an aggregate of approximately 1.7 million deadweight tons. 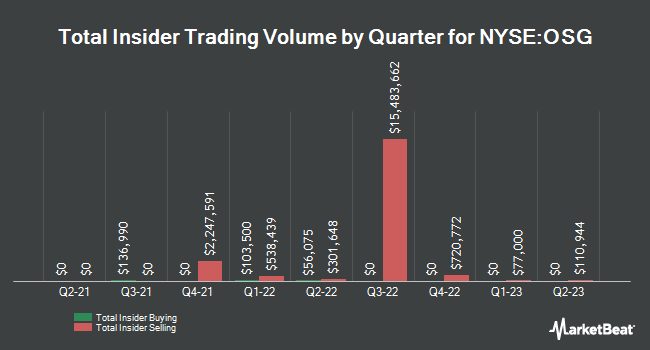 Complete the form below to receive the latest headlines and analysts' recommendations for Overseas Shipholding Group with our free daily email newsletter: